Suppose one has $k$ unit-radius disks, and the goal is to hide them inside a disk of radius $R \gg k$. The detection probes are rays along a line. (Think of the disks as tumor cells, and the rays as radiation.)

Q1. What is the optimal hiding configuration for $k$ disks?

That is, how can the $k$ disks be arranged to be difficult to detect by ray probes?

I believe the probability of detection from, say, random ray probes, would be proportional to the integral, over all directions $\theta \in [0,\pi)$, of the measure of the projection/shadow of the disks in direction $\theta$. So I seek a configuration with the smallest mean shadow.

For example, it seems that for $k=3$, the obvious is the optimal configuration: 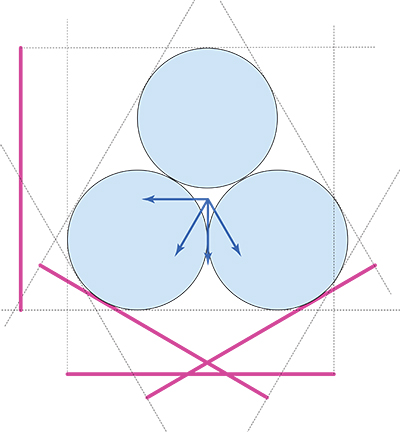 Q2. Is the projection integral measure identical to any of the well-known, previously studied disk packing constraints?

Or perhaps what I am suggesting has already been studied on its own, in which case a pointer would be appreciated—thanks!

It can be proved by approximating the perimeter by a polygonal curve and integrating each edge separately.