These ideas came to my mind while reading Lee's Introduction to Smooth Manifolds.
(Cf. discussion on p. 45.)

Let $E$ and $F$ be two Banach spaces together with a plain subset $A\subseteq E$.

Note the dependence of the extension on the point under consideration: $\bar{f}_a$

The leading principle of this approach to differentiability is that a linear approximation foots on linear spaces. Plain subsets or opens in general aren't!

Consider the function $f(z):=|z|^2$ defined on the real and imaginary axis only. Then around every point it has an extension to a continuously differentiable function within some neighborhood. But that extension is confined to the Cauchy Riemann equations and therefore it must be $f(z)=+z^2$ and $f(z)=-z^2$ simultaneously in every neighborhood of zero which is impossible. So the answer to the first problem is: No, in general there won't be an extension continuously differentiable in a whole neighborhood.

Besides this example still doesn't resolve(!) the second problem as one can choose the following extension: 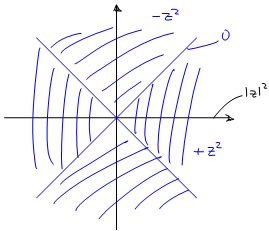