Derivative of the Median

I asked this at Math.StackExchange without any success (link):

What's the best way (or does it even make sense) to measure the instantaneous rate of change in the median of a collection of functions (where the median function at is defined at some $x$ as the point-wise median of the functional values at $x$)?

Set-up: I have a finite collection of continuous, differentiable real functions on an interval, $\{f_i(x)\}$. Since they are not nicely distributed (e.g. on a small subinterval some $f_j$ might be an extreme outlier), the point-wise median, $m(x) = \text{median}(\{f_i(x)\})$, is a better measure of the center than the average.

Question: How do you measure/compute/define the instantaneous rate of change in $m$?

Really, for some small interval around a given $x$, $m$ is just one of the $f_i$. But although this $f_i$ is in the center, how it's changing might be vastly different then how the bulk of functions are progressing. For instance, in general the collection of functions could be increasing (as evidenced in a plot or by general understanding of the contextual problem), but in the moment that $f_i(x)$ is central, $f'_i(x)$ could be negative. So does it make (more? any?) sense to define $m'(x) = \text{median}(\{f'_i(x)\})$?

In particular, the median function is in general at best Lipschitz.

The answer may be clear from an application: the median justice on the Supreme Court. See here. 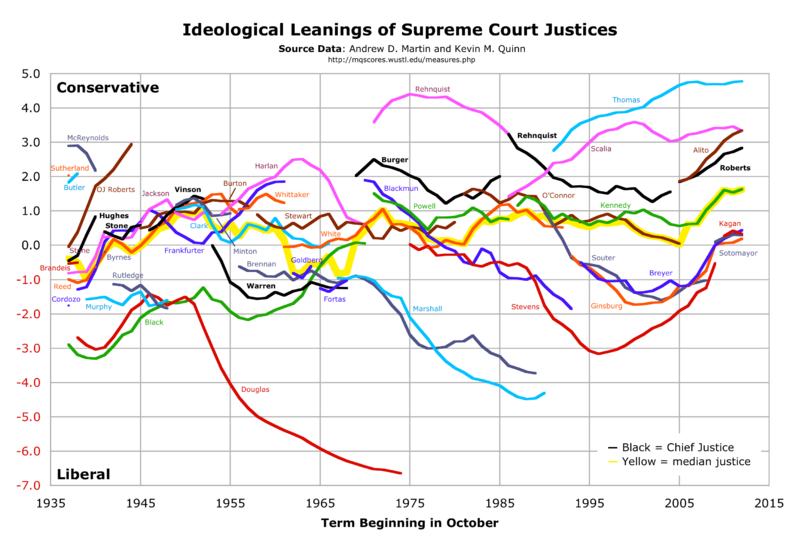 In this case there are nine $f_i$'s, for the nine seats on the Supreme Court, each in a different color. Each $f_i$ represents a score of the Justice's ideology, which may or may not be differentiable at any time.

The median ideology is shown with yellow highlighter. At any time $t$, let

Then there are four possibilities, from most to least common:

Note I am taking each $f_i$ to be an a.e. continuous function, defined at all times, as depicted in the graph. The underlying data is discrete, but I think this is a useful abstraction of the Justice's voting patterns.

There are probably no good answer to your question, apart from what you already said, with the addition of Deane Yang's answer. Moreover, it is easy to design examples where the derivative of the median exists, but is at each point very large in absolute value while the median is almost constant. So, let me suggest you to change your point of view.

Since the use of the median is to compensate for outliers, you might be interested in non-linear averages. Classical examples include geometric mean, harmonic mean, root mean square. Some of them minimize the effect of outliers (in this respect, square mean root could be a good choice).

Another possibility is to use a weighted mean, where the $i$-th weight depends on the rank of $f_i(x)$ among the values at $x$. Taking high weights on the center, you interpolate between the arithmetic mean and the median.

Last, you could take the median and then regularize by convolution, if what you are really interested in is the short- or mid-term rate of change, rather than the truly instantaneous rate of change.

Using any of these methods, you will easily get a smooth quantity. But the choice of the method should really be driven by the specifics of your problem.

Not the answer you're looking for? Browse other questions tagged pr.probability or ask your own question.

3
Probability distribution of the median
5
Can I relate the L1 norm of a function to its Fourier expansion?
3
Median-of-k elements
0
Measurable functions lifted onto a space of point measures are measurable
0
Lower bound for median of independent outcomes
4
Rate of convergence of uniform order statistics to their expectations
Question feed