I wonder if Knight's Tours have been explored in higher dimensions, using the following definition of a knight move.

I have found literature on knight's tours in 3D but under a different (planar) definition of move.1

It would be interesting to learn which (if any!) $n \times n \times n$ cube chess boards allow a knight's tour. 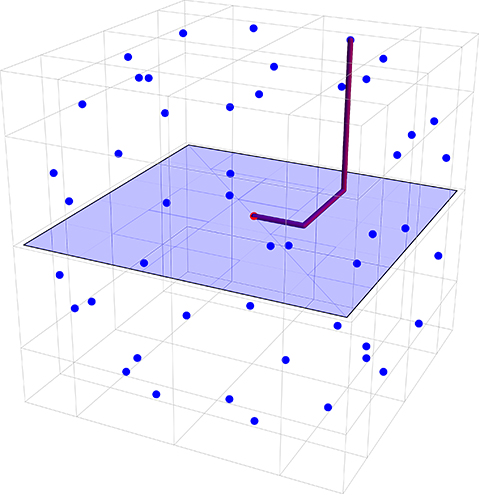 1 Awani Kumar. "Magic Knight's Tours in Higher Dimensions." (arXiv link) Addendum. BenBarber found much more relevant references for planar knight moves in higher dimensions: "with $n$ even, there is always a knight's tour provided that $n$ is sufficiently large." TMA made an incisive observation that answered my explicit question: There is no knight's tour for $d=3,4$, due to parity considerations. So, what remains is: (a) $d \ge 5$ and other odd triangular numbers, or (b) knight's tours of the even-coordinate-sum ("black") cells in $d=3,4$.
discrete-geometry recreational-mathematics chess hamiltonian-graphs
share|cite|improve this question
edited May 11 '14 at 23:46
Joseph O'Rourke
asked May 11 '14 at 13:41