Are there any interesting results on optimal packings in the plane using a fixed number of triangles (without a fixed size or shape constraint)?

For instance, what's the maximum area packing of the unit circle using at most $N$ non-intersecting (except possibly on the boundary) triangles inside the circle? This isn't very difficult with the additional assumption that the vertices of the triangle all lie on the circumference (we can smooth the triangles "together" to form a triangulation of a $(N+2)$-gon, and either use Jensen or compactness and further smoothing to show the regular $(N+2)$-gon is optimal). But in the general case, smoothing seems much more difficult---the triangles can "block" each other in much more complicated configurations, which seem hard to classify.

Edit (8/18/14). First, a potentially fruitful (and quite nice!) idea from fedja copied from AoPS, which works for the semicircle case (i.e. packing into a semicircle rather than a circle):

Then [in the semicircle case] all you would need to do (assuming that the diameter is $[-1,1]$) would be to consider the vertical cross-sections and notice that their length is a piecewise linear function with at most as many "down" corners as we have triangles, dominated by $\sqrt{1-x^2}$, so we would have to estimate the area between the axis and a piecewise convex curve with a fixed number of pieces under the circular arc, and everything would become pretty obvious. I guess the idea has a good chance to work in the current setting too, but the details will, most likely, be much less elegant :(.

I might as well mention the corresponding MSE thread.

Also, here's a potentially serious obstruction to most smoothing arguments, from an email of Tim Chu's:

Take a small $N$-gon and extend the exterior angles. 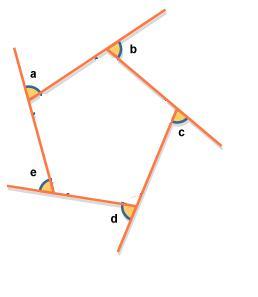 Place it in at the center of a very big circle. Then you get a shape that's almost the same as if you made a regular $N$-gon by having all the triangles share one vertex at the center of the circle, except instead these $N$ triangles trace out a small $N$-gon in the center instead of meeting at a single point.

(This example also breaks any approach that attempts to directly find two triangles $ABC$ and $DEF$ such that no other triangles intersect the convex hull of $ABCDEF$.)

We will prove that the $(n+2)$-gon is always the solution for $n$-triangles, by method of elimination.

$A_n$ is a solution satisfying the given conditions for $n$ triangles. By nature $A_n$ is a polygon or a collection of disjoint polygons.

We will start with a trivial, but nonetheless useful observation - if moving a set of vertices can increase the total area, $A_n$ is not a solution.

In general, if for a certain set of probable solutions, there exists a method to increase the area, then said set can be dismissed. On that we will begin:

(I apologize for lack of proper definitions, I had no one to check the proof with, so they just grew on me.) What is a hole and a hull?

Lets consider any candidate solution, $A_n$ (for now we will think of it as a polygon, not a collection of triangles), as a closed set in $\Bbb R^2$. Lets consider the boundary of $A_n$:

For an interpretation of (3) - this is mostly an elaboration on the first observation, that if moving a set of vertices can increase the total area, $A_n$ is not a solution. This observation dismisses all holes, which are not attached to the hull, as we can simply "shrink" them into nothingness. However in the case, where a hole has vertices in the hull, then moving a free vertex onto a shared vertex, will give us another triangle, which we can use to fill up said hole.

Upon reviewing the solution again, I think I can just remove (3), since all cases covered by it can also be dismissed by the first observation or (5).

If anything else is unclear, please tell me, I would appreciate it greatly.

Not the answer you're looking for? Browse other questions tagged discrete-geometry combinatorial-geometry packing-and-covering or ask your own question.