Unfoldings of trajectories on the Veech triangle $V_4$

Let $V_4$ be the isosceles triangle with base angle $\pi/8$. $V_4$ is a Veech triangle, so the dynamics of billiards on it are very well understood. 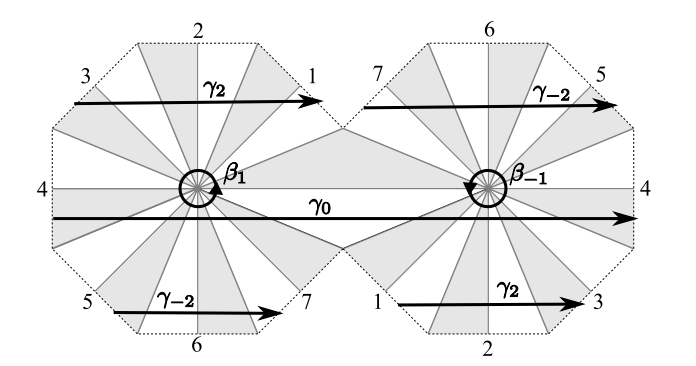 Above is the unfolding of $V_4$, with edge identification indicated by numeral. Let $\sigma$ be the orientation-reversing automorphism which exhanges the two octagons, $\tau_e$ the Dehn twist through the horizontal cylinders, and $\tau_o$ the Dehn twist through the cylinders in the direction $\pi/8$. It is easy to show using the Veech dichotomy that every billiard trajectory on $V_4$ is the image of one in the horizontal or $\pi/8$ direction under an automorphism in the group $\langle \sigma, \tau_e, \tau_o\rangle$. In section 9 of this paper (from which the diagram was borrowed) Hooper and Schwartz use this enumeration to prove that no periodic trajectory on $V_4$ is stable, and conjecture that no neighborhood of $V_4$ can be covered by finitely many orbit tiles.

The main obstruction to covering a neighborhood of $V_4$ seems to be that the closure of an open orbit tile cannot contain the ray of isosceles triangles with base angle more than $\pi/8$. Any such trajectory must degenerate to a saddle connection on $V_4$, which homological considerations show is either the boundary of the image of the cylinder containing $\gamma_0$ under some element of $\langle \sigma, \tau_e, \tau_o\rangle$ (specifically the boundary containing the central vertices), or bounds all cylinders in its direction. The latter case can be eliminated on general considerations, but the former cannot. Experimentally, it seems that every orbit tile in the former case extends in the direction of decreasing base angle; however in order to prove this I need a better understanding of what these saddle connections look like. To do so, it suffices to understand what the image of $\gamma_0$ under an element of $\langle \sigma, \tau_e, \tau_o\rangle$ looks like.

Specifically my question is:

Since you asked me to do so, I'm re-posting my comment as an answer:

"I believe that the answer to your question is yes. In fact, if "formula for its combinatorial type" means that you want to know the sequence of sides the trajectory f(γ0) crosses, i.e., you want to know the so-called cutting sequences for the unfolding of V4, then these were computed (for several Veech surfaces including V4) by D. Davis here arxiv.org/pdf/1309.4799v2.pdf "

Not the answer you're looking for? Browse other questions tagged ds.dynamical-systems billiards or ask your own question.

10
Does the $n$-gonal billiards conjecture follow from the $m$-gonal conjecture when $m>n$?
1
Computing saddle connections in flat structures
3
Convergence of trajectories and asymptotic stability
1
Generators for the affine automorphism group of the octagon
5
Are periodic billiard trajectories stable on a manifold with strictly convex boundary?
2
Veech group and mapping class group
2
6-periodic billiards trajectory in acute triangle
4
Maximal length of trajectories in billiard
Question feed