What was the Question that led Euler to his Investigations on Polyhedra?

The question that led Euler to his investigations on graphs is the well-known question related to the seven bridges of Königsberg, and that story is a must in every introduction to graph theory.

My question is whether it is also known what led Euler to investigate on polyhedra; was it a 'recreational' question, or was it a mathematical research question of his contemporaries?

A further question would be whether Euler continued his investigations on polyhedra after having discovered his famous characterisation of polyhedra of genus 0.

May I suggest this article by Joseph Malkevitch, an AMS Feature Column. Note particularly his point below (screen snapshot--not searchable) that polyhedra were simply not viewed, at the time, in terms of vertices, edges, and faces: 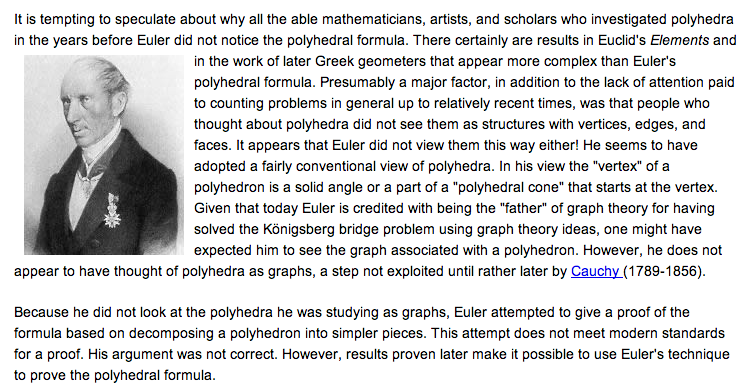 This point is also made in Imre Lakotos's Proofs and Refutations (Cambridge Univ. Press, 1976). Addendum. Joe Malkevitch sent me this relevant quote in a letter from Euler to Goldbach: "Recently it occurred to me to determine the general properties of solids bounded by plane faces, because there is no doubt that general theorems should be found for them, just as for plane rectilinear figures, whose properties are: (1): that in every plane figure the number of sides is equal to the number of angles, and (2) the sum of the angles is equal to twice as many right angles as there are sides, less four." (Biggs, Lloyd, and Wilson, Graph Theory 1736-1936, Oxford Univ Press, pp.76-77.)
Share
Improve this answer
edited Apr 19 '14 at 11:40
answered Apr 18 '14 at 18:34

Not the answer you're looking for? Browse other questions tagged ho.history-overview polyhedra or ask your own question.

9
what was Hilbert's geometric construction in his 17th problem?
31
Institutional response to "Esquisse d'un programme"
17
History and motivation for Tannaka, Krein, Grothendieck, Deligne et al. works on Tannaka-Krein theory?
22
Has anything (other than what is in the obituary witten by M. Noether) survived of Paul Gordan's defense of infinitesimals?
41
Did Hilbert laugh?
5
What was the first elementary proof that $\pi(x)=o(x)$?
12
Several questions about Gauss's mathematical conception of braids
Question feed