Definition of a cylinder functor in Waldhausen's K-theory

In Waldhausen's Algebraic K-Theory of Spaces, he defines a cylinder functor on a category $\mathcal C$ with cofibrations and weak equivalences (henceforth called a Waldhausen category) as the following: 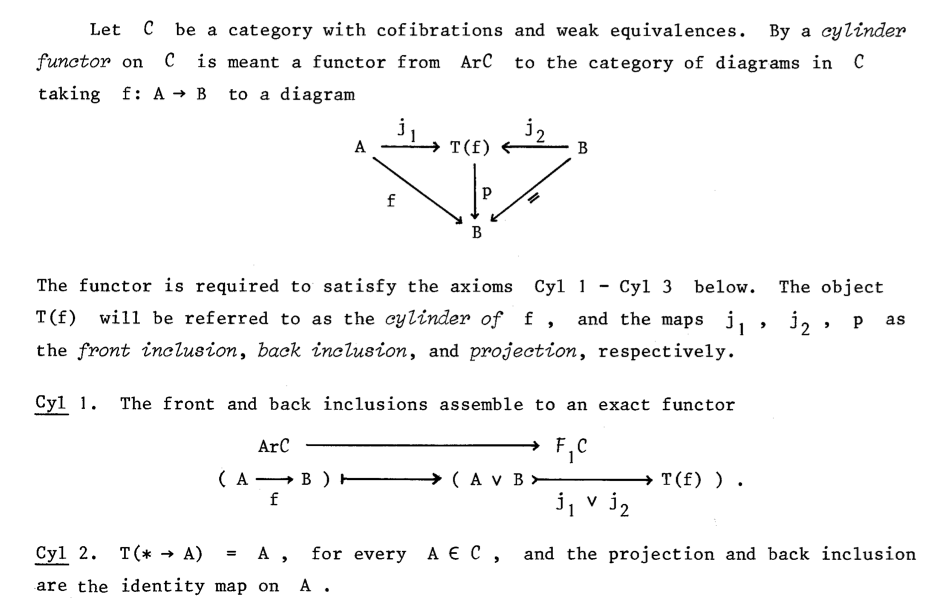 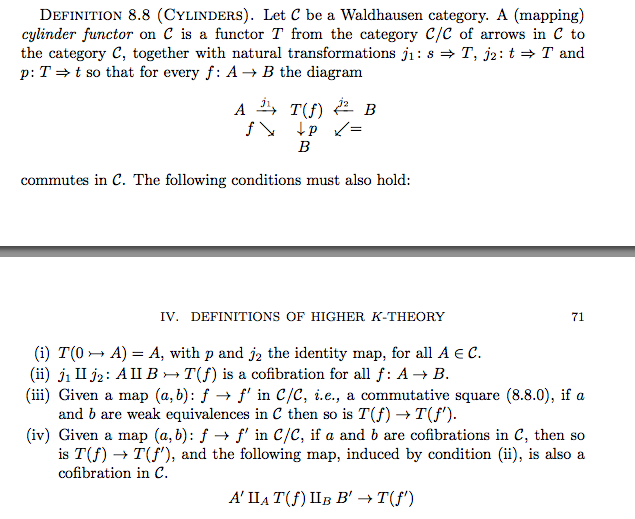 Finally, Gunnar in these online notes defines it like this: 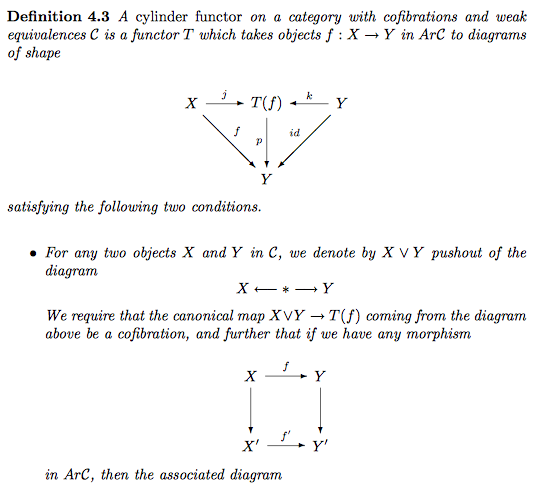 It's not evident to me that these definitions are all equivalent. Waldhausen's one is possibly the most concise. At first I thought that Weibel was fleshing out what it means for that functor in "Cyl 1" to be exact. If this is to be the case then condition iv. of Weibel should reformulate the fact that the functor of "Cyl1" takes pushouts along cofibrations to pushouts along cofibrations (one of the conditions on the definition of "exact functor"), but it isn't apparent that this is the case, if only for the trivial fact that a pushout in $Arr \mathcal C$ involves more arrows than there are on condition iv.

Gunnar's definition is closer in spirit to Weibel, but it's not really the same either. The map that iv. of Weibel asserts to be a cofibration in the case that $a, b$ are cofibrations, Gunnar's definition takes it to be an isomorphism for any $a,b$... Gunnar doesn't mention weak equivalences, either.

How do these definitions relate to each other?

To get a clear language going, let's be very explicit about naming these axioms.

For Weibel's axioms, we'll get a little bit more complicated. We'll call the lot by (Weibel), and we'll split the axioms a little more finely into the first three which correspond exactly to what you've listed, so (Weibel Cyl 1), (Weibel Cyl 2), (Weibel Cyl 3). The fourth axiom let's split into:

To see that we get most of (Waldhausen Cyl 1): notice $A \vee B$ always injects into $A \times B = T(f)$, so that we always take cofibrations to cofibrations and weak equivalences to weak equivalences. Clearly $pt \rightarrow pt \mapsto pt \rightarrow pt$ from $\mathrm{Ar}\, \mathcal{C}$ to $\mathrm{F}_1 \, \mathcal{C}$ so that it takes zero to zero. We just need to check that it preserves pushout's along cofibrations, but it does not. Thus this is not a Waldhausen cylinder functor.

Now you can quickly check that we satisfy (Weibel), and you get the proposition.

I suspect that in general (Waldhausen) does not imply either (Weibel Cyl 4b) or (Gunnar), and that (Gunnar) doesn't imply (Waldhausen) but I suspect you'll need even stranger examples. In any case, all three do cover the important examples that we care about the most.

Not the answer you're looking for? Browse other questions tagged kt.k-theory-and-homology algebraic-k-theory or ask your own question.