Let "$k$-necklace" denote the (multi)graph obtained from a cycle of length $k$ by duplicating every edge.

Note that the number of cycles in $k$-necklace is at least $2^k.$

Question : Suppose a simple graph $G$ contains at least $n^k$ cycles where $n$ is the number of vertices of $G$. Is it possible to obtain a $\Omega(k)$-necklace from $G$ by a sequence of deletion and contraction of edges?

I would be equally happy if one can guarantee $\sqrt k$-necklace (or $k^\alpha$ necklace for some $\alpha > 0$) instead of $k$-necklace.

I believe Anton Malyshev's answer to Do graphs with large number of paths contain large chain minor? answers this question as well. It is a bipartite planar permutation graph in which there are $n/2$ pairs of vertices $u_i$ and $v_i$, with edges from both $u_i$ and $v_i$ to $u_{i+1}$ and $v_{i+1}$ but not to each other. It contains large chain minors (paths with each edge doubled), but its cycle minors can have at most four doubled edges, two each at their minimum and maximum indices. Its number of cycles is $\Theta(2^{n/2})=n^{\Theta(n/\log n)}$.

Here is a drawing of the graph: 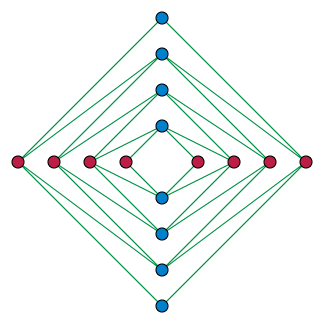 To form a cycle in it, start at one of the outer blue vertices, then at each step, extend two ends of a path (generally in one of two ways) to the two vertices at the next level inward, closing off the cycle at one of the inner two blue vertices. Or do the same thing starting and ending somewhere in the middle instead of the outside and the center, allowing the vertices and edges farther out to be used to double some of the edges in the minor.

Not the answer you're looking for? Browse other questions tagged co.combinatorics cycles graph-minors or ask your own question.

6
Examples of self-centered graphs (with large radius)
5
expected number of overlapping edges from k cycles in a graph
2
expected number of cycles in a “random” bipartite directed graph
3
Maximum number of edges $f(n,k)$ in a graph on $n$ vertices with no $k$-core?
2
Reference Request for: Finding Large Bipartite Subgraphs via Destruction of Odd Cycles in Graphs
9
Graphs with many edges avoided by Hamiltonian cycles
4
Do graphs with large number of paths contain large chain minor?
5
Minimum covers of complete graphs by $4$-cycles
Question feed