What kind of random matrices have rapidly decaying singular values?

Probably the independence assumption is the least reasonable one - for example, in an incidence matrix describing which users of Netflix have watched which movies, one expects lots of correlations between similar movies as well as between similar users; that is, one expects the incidence matrix to be well approximated by a low-rank matrix (which is precisely what we're doing above). I guess one also expects power-law (log-Gaussian?) distributions on, say, both the statistics of how many movies users have watched and how many users have watched movies. Have random models with this kind of behavior been studied, and do their singular values behave as expected?

I hope I understood the OP correctly, in case not please let me know. And I will discuss the case of eigenvalue instead of singular value without much loss of generality.

In case you are only interested in the distribution of eigenvalues of an i.i.d. sample covariance matrix(which is also a random matrix but underlying distribution is always of dimension one), the correct reference should be [Anderson] instead of [Johnstone]. [Johnstone] dealt with a much more general case where the underlying distribution is of multi-dimension and especially with double-Wishart situation and its associated concentration bound. On the other hand [Anderson] did not consider $n(p),m(p)$ but only $m,n$ as separated parameters that tend to $\infty$, which is not suitable in "machine learning era".

Unlike what the OP claimed, Bai's result also requires finite fourth moment [link1] which is not quite easy to verify in some applications, say the censored data. Assuming for the moment that the fourth moment of the underlying distribution is finite and consider the simple Gaussian regression for example, we usually study $N\approx n$ where $N$ is the sample size and $n$ is the number of variables in the model. You are right on the point if $N\gg n$ then all eigenvalues concentrate on a certain neighborhood of $\sqrt{N}$. However, a challenge in the field is that when $n$ is large and $N\approx n$. Intuitively, when the dimension of the regression model is high and the data is sparse. In this situation, some "machine learning" methods were proposed to select variables [Hastie&Tibshirani]. Among these methods, one is called sparse PCA which penalized sparse input and "forces the eigenvalues to deviate from $N$ with positive probability" if you want to view in Bai's law (Theorem 5.31).

So it is not that

"so it seems reasonable to infer that the (random) matrices people encounter in machine learning don't behave like they have i.i.d. entries."

The independent assumption is not necessary as you already noted. However, even if we dropped the independence we can still obtain a concentration bound for the largest eigenvalue. Consider $N(\boldsymbol{0},\Sigma)$ instead of $N(\boldsymbol{0},I)$. Again we consider regression setting, the following result tells you that without independence between variables we can still impose a bound on the covariance matrix which is required to proceed PCA or other variable selection techniques using eigenvalue decomposition. Notice that $Wishart(I,\bullet)$ is not a serious constraint as commented by [Johnstone] p.3.

To see more clearly how this will work in a regression case, we can actually see from definition that $\theta_{1,p}$ defined above is the solution to the generalized eigenvalue problem for random matrices $A,B$ such that $\det[x(A + B) − A] = 0$. A special case is $\det[P_{X}x − I] = 0$ where $P_X$ is chosen to be a projection matrix(OR the estimated covariance matrix) in regression setting. But as expected as we saw in the result above, as dimension of the model $p$ increase, such a convergence will slow down at the rate of $O(p^{-2/3})$, which allows more freedom for "extremely large/small eigen values".

I plotted an illustration as below (NOT Exact simulation!) 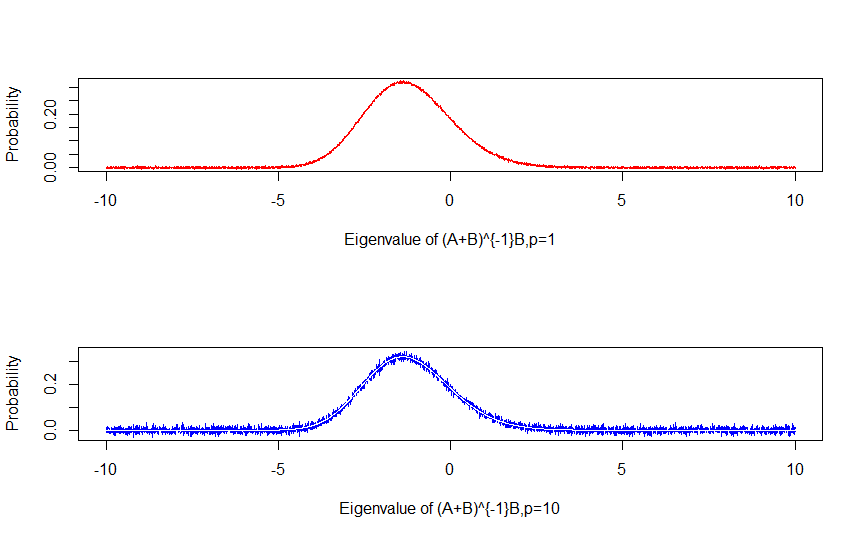 So for most Gaussian data, the largest eigenvalues will exponentially converge to a certain distribution, which means that the decaying rate of the largest eigenvalues is determined by the family of Tracy-Widom distribution indexed by (sample size) $m(p),n(p)$. Moreover we can even study the speed of convergence in a more precise way using the "central limit theorem"(circular law) for random matrices such as [Jiang].

Results of similar spirit concerning non-Gaussian data could be found in [Absil et.al]. In that paper the authors concern about the uniform distribution over a Grassmanian and their Theorem 1 (not copied here) also showed that the distribution of canonical angles between the spaces spanned by columns of two uniformly distributed random matrices $A,B$ are also dominated by Tracy-Widom distribution (multiplied by a gamma-polynomial term in $p,n(p)$). The cosines of canonical angles are exactly the singular values of $A'B$.[link3, Absil et.al]. An earlier related result is obtained in [Diaconis&Shahshahani] which considers only unitary random matrices.

Therefore the relative magnitude $\frac{\lambda_1}{\lambda_2}$ instead of $|\lambda_1-\lambda_2|$ are used as criterion when we choose which $k$ principle components are to remain in the model. This also explains a well-known drawback of PCA, which is that PCA is scale-dependent.

The asymptotic distribution of eigenvalues of a (OR asymptotically w.r.t. $m,n$) Gaussian random matrices is dominated by the Tracy-Widom distribution and its convergence behavior is controlled by an exponential rate associated with deviation $s$ and a polynomial rate associated with dimension $p$. Therefore whether the eigenvalues of a given random matrix concentrates together depends on the $m(p),n(p),p$ and eventually on the dimension $p$.

$\bullet$ The eigenvalues of product uniform distributions (on Grassmanians of dim $p$) will not decay rapidly under certain constraints.

Therefore it is safe to say that in most applications, as long as $m(p),n(p)$(usually sample sizes) grows with $p$(usually model dimension) in a reasonable manner, the eigenvalues will neither concentrate severely NOR change their relative magnitude too dramatically.

On the other hand, if a random matrix is actually generated from a model with varying (increasing) sample size $N$, then it will most likely have a set of rapidly decaying eigenvalues under mild constraints as discussed above.

In case where the growth conditions are not satisfied, the word "sparse" come into play.

Later I have a nice discussion with some expert in the field, who pointed out that the eigenvalue problem can be framed as the distribution of roots of a polynomial with random coefficients(coefficients as random variables) and simultaneously a kernel if the covariance matrix is p.d.

And by now I think your question that

Have random models with this kind of behavior been studied, and do their singular values behave as expected?

[Hastie&Tibshirani]Trevor Hastie and Robert Tibshirani "Statistical Learning with Sparsity: The Lasso and Generalizations."

[Diaconis&Shahshahani]Diaconis, Persi, and Mehrdad Shahshahani. "On the eigenvalues of random matrices." Journal of Applied Probability (1994): 49-62.http://statweb.stanford.edu/~cgates/PERSI/papers/random_matrices.pdf

Not the answer you're looking for? Browse other questions tagged pr.probability linear-algebra st.statistics random-matrices or ask your own question.

12
angle between subspaces
14
References for reasoning about the spectrum of a convex body?
18
How fast can extreme eigenvalues of the average of random matrices converge to their expectation?
4
Spacing of the largest singular values of Wishart matrix
2
Bounds on the eigenvalues of the covariance matrix of a sub-Gaussian vector