I've been told that Thurston and others have tackled this problem and failed, so apparently it is fairly hard. Actual question: Are there references discussing existing attempts?

The problem is likely very different for even vs. odd $d$, since for even $d$ we can almost fold along geodesics down to a single triangle. That is, given any $\epsilon > 0$, there is an almost isometric embedding of $T_{2d}$ into an $\epsilon$ neighborhood of a single triangle, where the isometry is off by a factor of $1 \pm \epsilon$.

For odd $d$, at least, my intuition is that it is completely unreasonable that such an embedding exists: the number of triangles in a ball grows exponentially with the radius due to the exponential growth of hyperbolic space, which results in an exponential number of arbitrarily closely layered sheets.

Here is the radius 5 portion of $T_7$ in the Poincare disk model, together with an embedding into $\mathbb{R}^3$: 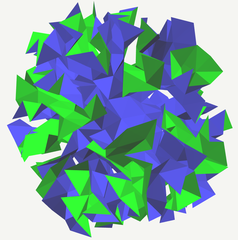 Ian Agol's example in the comments generalizes -- you can probably tile any triply periodic surface with equilateral triangles (after some fiddling you might even make them flat triangles) and the tiling will admit a covering map from a tiling of the hyperbolic plane because of the negative Gaussian curvature. I am not sure if you can get all $T_d$ this way (the tilings you get don't necessarily have constant valence).

I learned about this connection between triply periodic surfaces and hyperbolic tilings from this paper by Ramsden, Robins and Hyde. They also have a nice website with more information. They consider more general tilings, not just of equilateral triangles. As I said, to make these into the flat equilateral triangular tilings you are looking for you may need to do some fiddling around.

Here's a picture I just found of $T_8$ on Schwarz's D-surface by Doug Dunham. 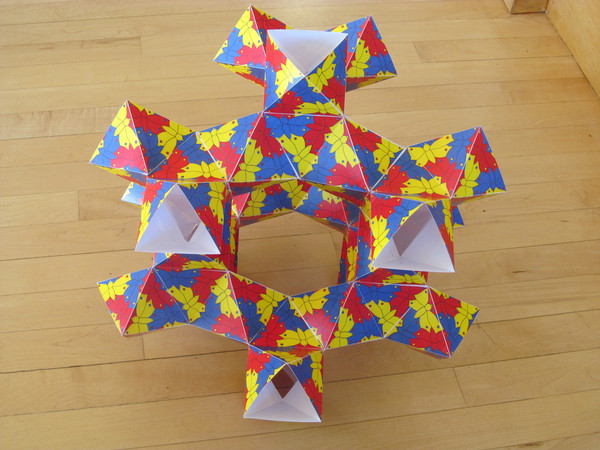