Imagine the beginning of a game of pool, you have 16 balls, 15 of them in a triangle <| and 1 of them being the cue ball off to the left of that triangle. Imagine that the rack (the 15 balls in a triangle) has every ball equally spaced apart and all balls touching all other appropriate balls. All balls are perfectly round. Now, imagine that the cue ball was hit along a friction free surface on the center axis for this triangle O-------<| and hits the far left ball of the rack dead center on this axis. How would the rack react? I would imagine this would be an extension of newtons cradle and only the 5 balls on the far end would move at all. But in what way would they move? Thanks

This question was cross-posted on Math Stack Exchange. Here is a copy of my answer for it there.

This is it.  The perfectly centered billiards break.  Behold.

This break was computed in Mathematica using a numerical differential equations model. Here are a few details of the model:

For this model, the entire collision takes place in the first 0.2 milliseconds, and none of the balls overlap by more than 0.025% of their radius during the collision. (These figures are model dependent -- real billiard balls may collide faster or slower than this.)

The following picture shows the trajectories of the billiard balls after the collision. 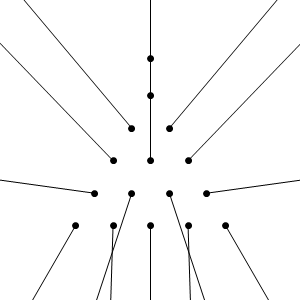 After the collision, some of the balls are travelling considerably faster than others. The following table shows the magnitude and direction of the velocity of each ball, where $0^\circ$ indicates straight up.

By the way, if you add up the sum of the squares of the speeds of the balls, you get 100, since kinetic energy is conserved.

Glenn the Udderboat points out that "stiff" balls might be best approximated by a force response involving a higher power of the distance (although this isn't the usual definition of "stiffness"). Unfortunately, the calculation time in Mathematica becomes longer when the power is increased, presumably because it needs to use a smaller time step to be sufficiently accurate.

As you can see, the result is very similar to my initial answer on Math Stack Exchange. This seems like good evidence that the behavior discussed in my initial answer is indeed the limiting behavior in the case where this notion of "stiffness" goes to infinity.

As you might expect, most of the energy in this case is transferred very quickly at the beginning of the collision. Almost all of the energy has moves to the back corner balls in the first 0.02 milliseconds. Here is an animation of the forces:

After that, the corner balls and the cue ball shoot out, and the remaining balls continue to collide gently for the next millisecond or so.

While the simplicity of this behavior is appealing, I would guess that "real" billard balls do not have such a force response. Of the models listed here, the intial Hertz-based model is probably the most accurate. Qualitatively, it certainly seems the closest to an "actual" break.

Note: I have now posted the Mathematica code on my web page.

This is more of a comment inspired by Jim Belk's answer than an answer to the question in itself. It is also more physics than mathematics. However, I hope I can help readers see that this system is related to some very interesting science.

I wanted to say a little bit about the dynamics of the energy transfer in the billiard break. Very naïvely, you might think of a triangular lattice of interacting particles (the billiard rack) as acting like a discrete model for a crystalline solid. Solids support sound waves (just knock on your table and listen), and so again naïvely we might expect that the billiard break occurs via some strong compressional sound waves propagating through the system, akin to those vibrations induced when knocking on wood. However, this naïve intuition is wrong!

A system of billiards all just barely touching, like Newton's cradle, is an example of a sonic vacuum (see e.g. this expository physics article).

The term was coined by Vitali Nesterenko to describe mechanical systems where the speed of sound vanishes and the tiniest perturbation must lead to supersonic shocks -- behavior very far from that of ordinary sound. The usual formula for the speed of sound in say a chain of identical masses joined by identical springs is $v_s=\sqrt{k/m}a$ where $k$ is the spring constant, $m$ is the mass, and $a$ is the length of the springs. In a system interacting via a nonlinear force law like Hertz's, the effective spring constant is $df/d\delta|_{\delta=0}=0$ (where $\delta$ is the overlap between particles) which actually vanishes! Thus the speed of sound is zero. This is a very special situation which occurs because the particles are all just barely touching.

The consequence of all this is that energy cannot propagate via ordinary sound, and what appears instead is a shock wave, satisfying a nonlinear PDE. In Jim Belk's pictures, this is what we see as the "shock front" colored yellow traveling from the point of impact through the billiards.

Nesterenko wrote down a continuum limit for systems of Hertzian particles (the following is specialized to particles arranged on a triangular lattice):

(If one wants to study shock waves in systems of particles interacting with other force laws, then some of the exponents here change). Also, none of the above discussion really depends on the "perfectly centered" initial condition. I think the paper I cite below may give you some idea of what can happen as we vary the initial angle.

It might be interesting to compare the solutions of this equation with suitable boundary conditions to simulations along the line of Jim Belk's for a very large pool ball rack (large enough at least so that one can follow the shock wave for an appreciable length of time).

The derivation of the above equation is apparently in Nesterenko's book "Dynamics of Heterogeneous Materials", though I learned it from this very relevant paper coauthored by some friends of mine: Transmission and reflection of strongly nonlinear solitary waves at granular interfaces, by A. M. Tichler, L. R. Gomez, N. Upadhyaya, X. Campman, V. F. Nesterenko, V. Vitelli. In this paper they study the propagation of shocks through interfaces between packings of billiard balls of two different masses. I think you'll agree it's quite close to the billiard break. 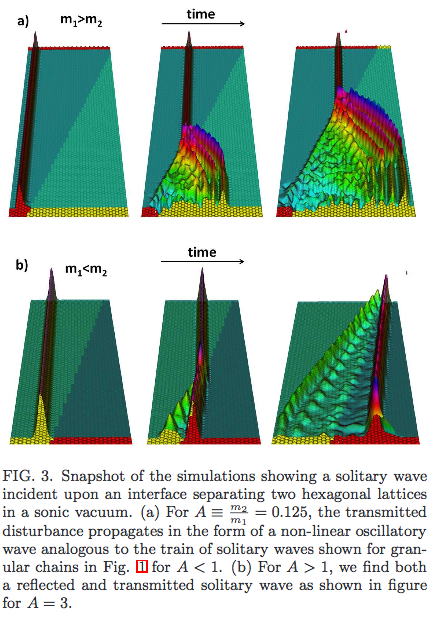 Not the answer you're looking for? Browse other questions tagged ds.dynamical-systems physics billiards or ask your own question.

33
Does there exist a shot in ideal pocket billiards?
100
Light rays bouncing in twisted tubes
5
Permuting Racked Pool Balls with a Single Break
3
Monotile that tiles when you apply a rubber band
Question feed