history of calculus of several variables

Everybody knows that Leibniz and Newton (or Newton and Leibniz, if you wish) invented calculus, i.e. they developed the notion of differentiability for a function of one real variable. But who had for the first time the right idea about generalizing their notions to functions of several variables? I am talking in particular about total differentiability.

According to Ref. 2, see second screenshot, the notion of an integrating factor goes back to Euler (1728), followed a decade later by Clairaut's more systematic treatment of total differentials. 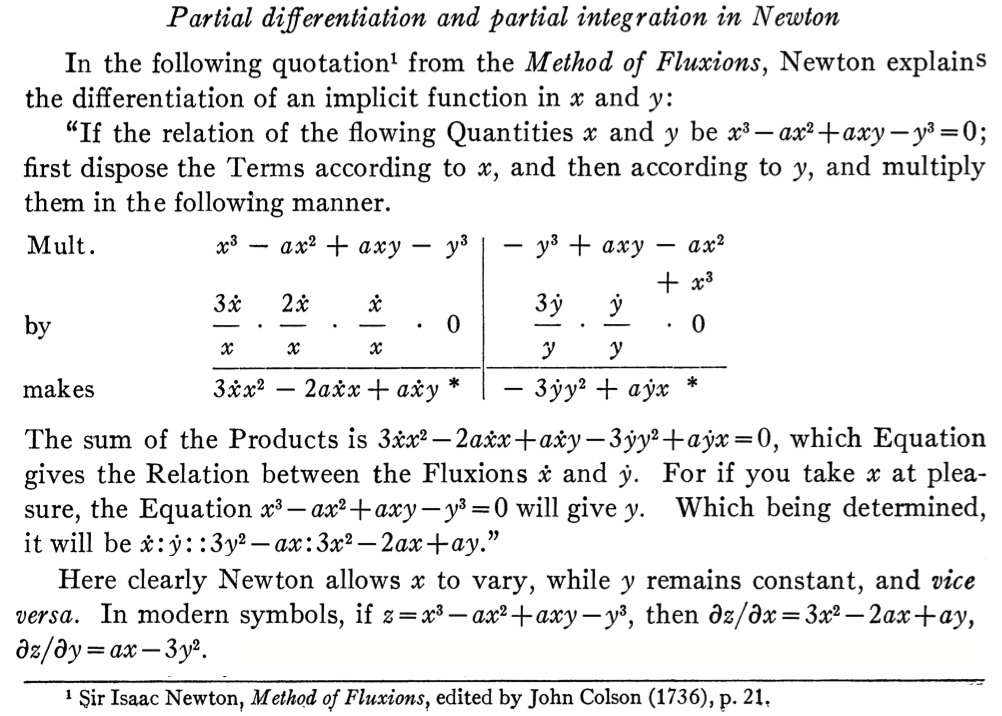 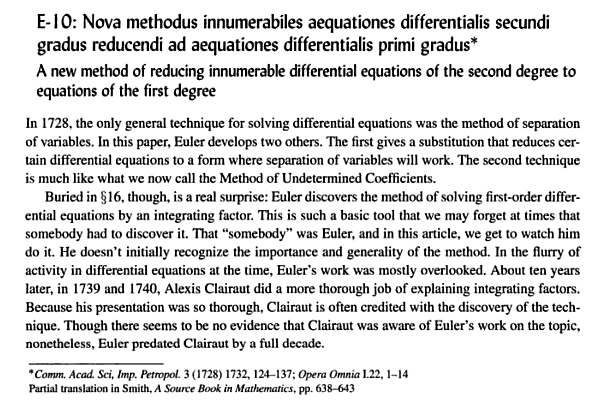 Functions of several variables in the modern sense were never systematically considered in the 17th century. Instead the idea of partial differentiation arose in connection with families of curves, through the idea of differentiating with respect to the parameter (as one does for example when finding the envelope of a family of curves). For a synopsis of how this idea arose in the 1697 correspondence between Leibniz and Johann Bernoulli, see my review of Engelsman's Families of Curves and the Origins of Partial Differentiation (1984), an excellent study. Newton never discussed partial derivatives in any systematic way.

To Carlo Beenakker's references about total differentials (which came first), one might add a word about Alexis Fontaine, inventor of the notation (notion?) of partial derivative:

Not the answer you're looking for? Browse other questions tagged ca.classical-analysis-and-odes ho.history-overview or ask your own question.

24
Was Jacobi the first to notice the ambiguity in the partial derivatives notation? And did anyone object to his fix?
7
Survey of the history of calculus?

8
Where can I learn about (the asymptotics of) Toeplitz operators?
6
Rigorous definition, detection and test for trending vs. mean-reverting behaviour of stochastic processes
9
If $f$ is $C^{\infty}$ and $f^2$ is analytic, then $f$ is analytic
7
Salvaging Leibnizian formalism?
6
Shuffle (co-)multiplication and generalized Leibniz formula in tensor calculus
8
Euclid vs Eratosthenes
Question feed