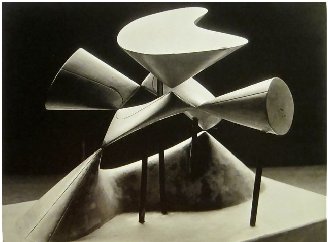 The picture shows 1936 photograph by Man Ray of a Kummer surface plaster model in the collection of the Institute Henri Poincaré (from Mathematics, Art and Science of the Pseudosphere by Kenneth Brecher). I was surprised to learn that this fancy surface has something to do with the quantum theory of relativistic electrons.

In fact Eddington discovered Majorana spinors and the modern account of this connection can be found in the papers Some remarks on the algebra of Eddington's E-numbers by Nikos Salingaros and The Kummer Configuration and the Geometry of Majorana Spinors by Gary W. Gibbons.

It is known (originally due to Majorana) that the quantum mechanics of photons can also be based on a Dirac-like equation (see also Photon Wave Function by Iwo Bialynicki-Birula. Is it possible to extend Eddington's considerations in this case too? And what projective geometry structure will be behind it? I would be grateful for references about the modern mathematical meaning(s) of Eddington's construction.

But this may also be a dimensional coincidence. (I doubt it.)

This question is interesting. I have done a little work in this direction, looking at brachistochrones over the Dirac matrices, like a geodesic idea. Here's a link to a paper that might be relevant: "Time Dependent Biqubits", Peter Morrison (Wayback Machine link) (current link).

I agree with Prof. Eddington in that there are definitely links between tensors or complex matrices and the Dirac equation. My work looked at whether it was possible to formulate the Dirac equation in terms of fundamental non-commutative matrix calculus instead of the standard approach that uses differential operators to define the algebra. It is, but by the same caveat, I would say it is a a little more involved; however, the simplicity of representation is attractive.

Thank you for posting this idea. It's good to know I'm not alone in looking at the properties of these types of curious surfaces etc. Incidentally, in looking at geodesics on a 4-dimensional submanifold of a 16-dimensional space, the electron rest mass came out neatly as a constant of motion, consistent with what we observe.

Not the answer you're looking for? Browse other questions tagged ag.algebraic-geometry reference-request mp.mathematical-physics or ask your own question.