Constructing a vector field with given zeros on a torus

Yes, this can be done with the Pontryagin-Thom construction. This answer is essentially the same as Pietro Majer's, by the way, but perhaps a bit more "hands on" and also more sketchy.

The first step is to note that vector fields on the $d$-torus with zeros at points $x_i$ can be constructed from maps from the $d$-torus punctured at each $x_i$ to the $(d-1)$-dimensional sphere $S^{d-1}$.

So how do we actually construct a map from this punctured $d$-torus to $S^{d-1}$ such that the degree of the map restricted to a sphere around the puncture $x_i$ is precisely $n_i$? Let us begin by noting that $\sum_i n_i=0$ implies that we can draw disjoint oriented curves in the punctured $d$-torus each beginning and ending at one of the punctures such that the net number of outgoing arrows at each $x_i$ is precisely $n_i$. (These oriented curves correspond roughly to the paths that the zero-antizeros make under the diffeomorphisms described by Pietro Majer). 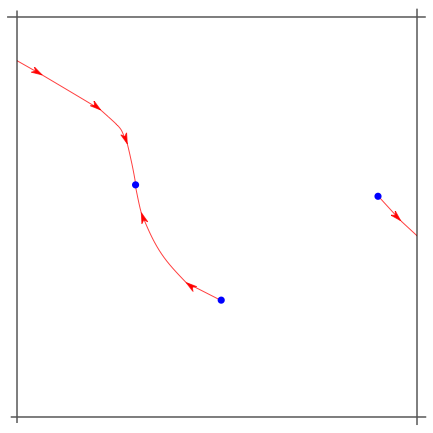 Here and below I will include some pictures I had lying around which eventually constructs a 2d vector field (actually a line field) in a square patch of the plane with three zeros, one of index -2, and two of index +1. In this first picture I have simply drawn in red curves as the oriented curves that I have just described. The punctures / eventual zeros are the blue points.

The idea of the Pontryagin-Thom construction is to identify these oriented curves as the inverse image of the north pole on $S^{d-1}$. Let us now take tubular neighborhoods of these curves which are also all disjoint. A cross-section of each tube is a $(d-1)$-disk with a distinguished normal (pointing along the orientation of the curve) which we map to $S^{d-1}$ by a stereographic projection-like map so that the center of the disk maps to the north pole, the boundary of the disk maps to the south pole, and the orientation of the disk is such that the distinguished normal would correspond to the outward pointing normal of the standard $S^{d-1}$ embedded in $R^d$. 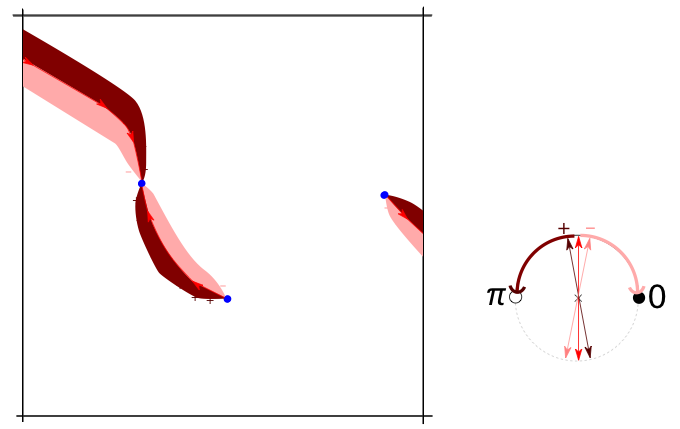 In this picture I show the construction of the map in the tubular neighborhoods. I have depicted $\mathbb{RP}^1$ (as the set of orientations of double-headed arrows in the plane) on the right instead of $S^1$ but as the two spaces are homeomorphic the idea is the same. The red curves map to the north pole, in the case of this $\mathbb{RP}^1$, the vertical direction. The cross-section of the tubular neighborhood in this case is just an interval, and we map the open interval to the circle minus the south pole (or as depicted, $\mathbb{RP}^1$ minus the horizontal direction). This is the meaning of the pink and maroon shaded areas -- they map to the pink and maroon shaded parts of $\mathbb{RP}^1$. 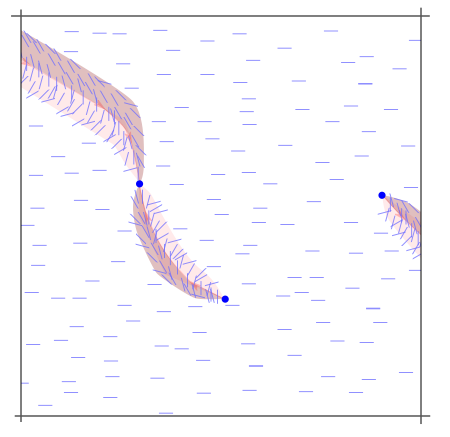 I've sketched the construction of a continuous map from the punctured $d$-torus to $S^{d-1}$ - this can be made smooth with partitions of unity. (I believe there are additional restrictions on analytic vector fields, e.g. the fact that meromorphic functions on elliptic curves must have at least two poles)

See Milnor's "Topology from the differentiable viewpoint" for more details on the Pontryagin-Thom construction.

Sketch of a construction. The underlying local fact is: given a field on a manifold $M$, and a point $p$ where it does not vanish, you can modify it on any nbd of $p$ and create a couple "zero - antizero" of the field. This way you can make a field with any larger number of zeros of given index, the only constraint being that indices sum to $\chi(M)$. To locate the zeros where you like on $M$, pull-back with a suitable diffeo of $\mathbb{T}^n$: this is also easily done, since diffeo's isotopic to the identity act transitively on $M$. The construction is also reversible, starting wlog from regular zeros, so that a couple of zero - antizero can be annichilated.

In two dimensions, an explicit construction can be given: First find a doubly periodic meromorphic function f with given zeros and poles (you can construct f explicitly in terms of the p function), and then take your vectorfield to be $f(z)/(1+|f(z)|^2)$.

Not the answer you're looking for? Browse other questions tagged dg.differential-geometry manifolds torus or ask your own question.