(Let me henceforth abbreviate "direcly similar" with "similar.") My question is:

Q1. Is there a natural extension to $\mathbb{R}^3$ and to higher dimensions? 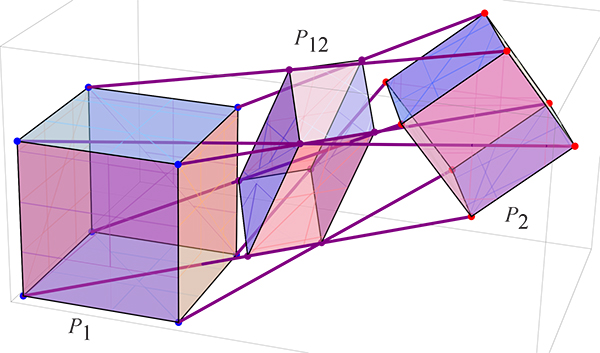 But perhaps this is true?

Q2. Is the convex combination of two cubes (scaled, rotated, translated) always a parallelopiped? A parallelotope in $\mathbb{R}^d$?

Another approach would be to restrict the transformations:

Certainly if $P_2$ is just a translated, scaled copy of $P_1$, then any convex combination is similar, in any dimension. Rotations are the culprit. But perhaps some rotations still lead to similarity.

It seems likely this has all been well-explored. If so, thanks for pointers!

First of all, we may forget about translations, since they just shift the convex combinations. Thus we may regard the direct similarity as a linear transform given by an orthogonal matrix $A$ multiplied by some constant $\alpha$. Then the transform mapping the otiginal polytope to the convex combination is given by $$ B=\lambda I+(1-\lambda)\alpha A. $$ This is also a linear transform, so the image of a parallelotope is also a parallelotope (if the transform is non-degenerate; notice that it may be degenerate only if $\lambda=\pm(1-\lambda)\alpha$ since the complex eigenvalues of $A$ have unital absolute values; in this case $A$ should have eigenvalue $\pm 1$, and this may happen even in the planar case). This answers Q2.

As for Q1 (and Q3), we need to check whether $B$ is an orthogonal matrix multiplied by a real number $c$ (provided that the polytope is solid). This is the case iff all eigenvalues of $B$ have the same absolute value, which reduces to the following two options:

1) All eigenvalues of $A$ coincide (thus $A$ is scalar, and the transform is a scaling); or

2) All the eigenvalues of $A$ are $e^{\pm i\theta}$ for some fixed $\theta$ (surely these two eigenvalues coinciding multiplicities). Thus $A$ acts as a composition of rotations in $d/2$ mutually orthogonal planes. This case cannot happen in odd-dimensional space (which answers Q3), but it sometimes happens in all even-dimensional spaces.

The phenomenon of the planar case is that for the plane there are no more options.

Not the answer you're looking for? Browse other questions tagged mg.metric-geometry convex-geometry plane-geometry or ask your own question.

15
Towards a metric characterization of Euclidean spaces
6
Original proof of Pappus' Hexagon Theorem
2
A quantitative version of Straszewicz's theorem?
4
Problems similar to Borsuk’s Theorem in the plane
2
Maximum possible number of similar three-colored triangles
5
A new theorem in projective geometry
57
Does this geometry theorem have a name?
3
Pogorelov's rigidity theorem vs Cohn-Vossen rigidity theorem
Question feed