Let the plane contain a number of pairwise disjoint open unit-radius disk obstacles. Because they are open, their bounding circles can touch tangentially. Shortest paths between two points $a$ and $b$ in the complement of the disks generally look like this: 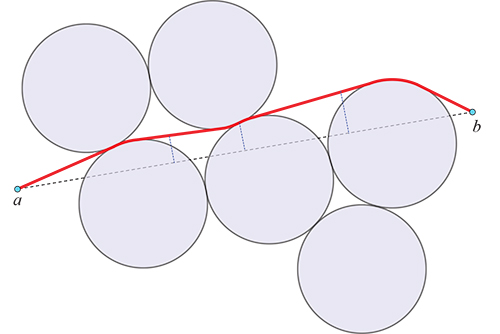 Notice that the (red) path from $a$ to $b$ is monotonic with respect to the line containing $a$ and $b$—it meets every line orthogonal to $ab$ in a single point—and in that sense never "reverses direction." However, it is possible for a shortest path to reverse direction, e.g.: 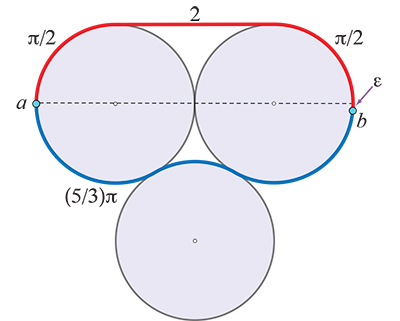 However, I am hoping this has a positive answer:

Q1. If the disks form an infinite hexagonal penny packing, are all shortest paths (between pairs of points in the complement of the packing) monotonic with respect the line through the endpoints?

Q2. If the disk centers form a regular lattice of $\mathbb{R}^2$, are all shortest paths monotonic?

Here I am not requiring that the disk boundaries be tangent, but rather just that the disks form a regular array. I am wondering if it is irregularity that allows nonmontonic geodesics.

The context is that, perhaps, in disk arrangments where the shortest paths are monotonic, the $O(n^2)$ algorithms for finding a shortest path amidst $n$ disks can be improved to subquadratic.