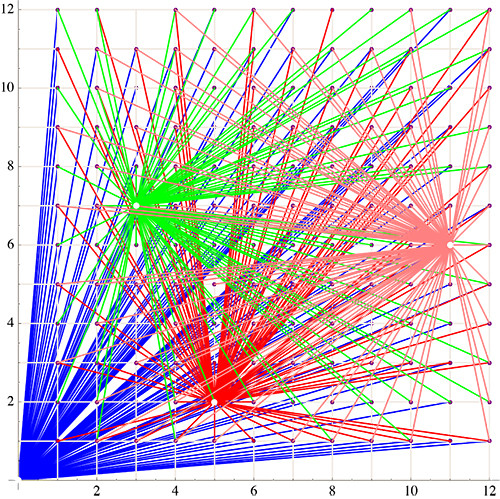 Now, for every pair of edges that properly cross in this graph, delete the longer edge, retaining the shorter edge. In the case of ties, give preference to the earlier site, in an initial sorting of the sites. The result is a planar graph, because all edge crossings have been removed: 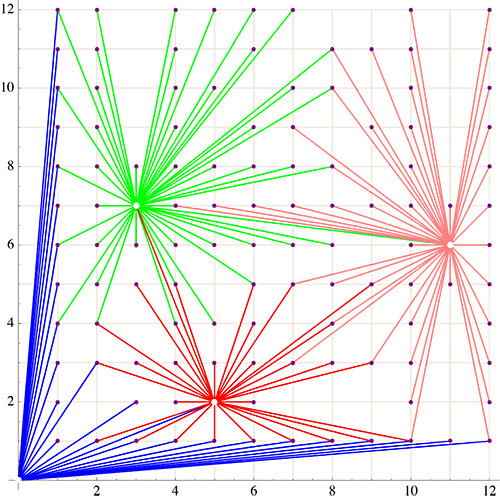 Some nodes of this graph (at least those on the convex hull) have a (countably) infinite degree. More generally,

The context here is that I am considering a type of "lattice visibility Voronoi diagram." One can ask many specific questions of this structure, but I'll confine myself to the $4$-coloring question, which may have broader interest.

The answer to both questions is "yes", by the De Bruijn–Erdős theorem.

As the other answer indicates, the yes answer to your question is known as the De Bruijn-Erdős theorem.

This holds regardless of the size of the graph. The De Bruijn–Erdős theorem is a particular instance of what in combinatorics we call a compactness argument or Rado's selection principle, and its truth can be seen as a consequence of the topological compactness of (arbitrary) products of finite spaces. In the countable case, a standard argument invokes König's lemma, an idea very useful in Ramsey theory (see here for an example).

that the chromatic number of $G$ is $4$ under choice, and uncountable if all sets of reals are Lebesgue measurable. This is treated in detail in Soifer's book,

that the chromatic number of the plane (the least number of colors needed so any two points at distance one from each other have distinct colors) is at least $5$ if we require each color to be measurable. On the other hand, it is a famous open problem to determine the chromatic number of the plane (assuming choice), and it was not established until fairly recently that it is at least $5$.

Beyond this, we know is that the chromatic number of the plane is between $5$ and $7$, and that any unit distance graph requiring 7 colors should be reasonably large, see

Not the answer you're looking for? Browse other questions tagged graph-theory mg.metric-geometry discrete-geometry graph-colorings or ask your own question.

47
What fraction of the integer lattice can be seen from the origin?
6
In ZF, are there infinite planar graphs that are not 4-colorable?

1
Probability of first return to starting vertex in Random walk on regular finite graph
4
A question about trees and planar graphs
6
Integral straight-line embeddings of planar graphs
5
Are all infinite graphs $3$-weak-edge colorable?
9
Graph planarization via rewiring
3
On some infinite planar arrangements with triangles
Question feed