Is the ratio Perimeter/Area for a finite union of unit squares at most 4?

Update: As I have just learned, this is called Keleti's perimeter area conjecture.

Prove that if H is the union of a finite number of unit squares in the plane, then the ratio of the perimeter and the area of their union is at most four.

Remarks. If the squares must be axis-aligned, then this is easy to prove. If we replace unit squares with unit circles, then the statement is sharp and true for two (instead of four). The best known bound (to me) is 5.551... by Zoltán Gyenes. There is much more about the problem in his master thesis which you can find here. 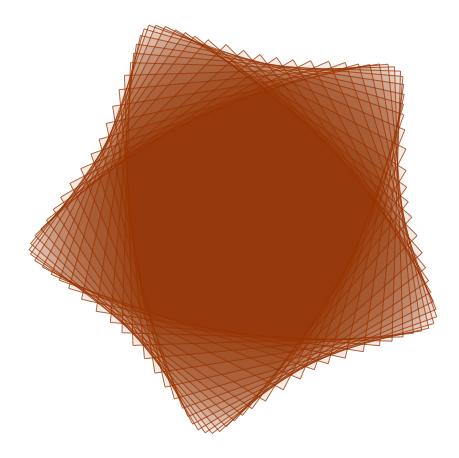 I have a small observation, which is a construction that only just fails to give a counterexample (and is not something trivial like a single unit square). Take a large n and take a unit square and take the union of the n rotations about its centre through angles of 2π/n. The result is like a circle with a serrated edge. The radius of the circle is $2^{-1/2}$, so its area is π/2. Its perimeter is $2^{1/2}&pi;$, but because of the serration this increases to approximately 2π. Unfortunately, this gives us a ratio of 4-ε. But it seems to indicate that any proof that 4 is the correct ratio will have to be somewhat complicated.

I cannot give a full proof, but I can reduce the problem to another one that I think some people might know the answer to.

Here is the problem:

First assume $A\le\pi/4$, say $A=\pi r^2$ for some $r\le\frac12$. Since the circle minimizes the boundary length for a given area, we get $P\ge 2\pi r$ which gives the claim. (Note that this also works if you assume that the diameter of $U$ is $\le 1$ and so this gives a second proof of Proposition 7.1 in the mentioned thesis.)

If $A>\pi/4$ this proof doesn't work. We have to replace the circle with the corresponding minimizer inside the square. I do not know what this minimizer looks like, somewhat like a balloon you blow up inside a box. But minimal surface people might know and once you know the shape of that set, you can compute the boundary length to solve the problem as above. Q.E.D.

Next I show how to solve the original problem once you have Problem 1. I use induction on the number of squares. For $n=1$ there is nothing to show. We do $n\to n+1$. So let a set $F$ in the plane be given which is the union of $n$ unit squares. Let $A(F)$ be its area and $P(F)$ its boundary length. By induction hyothesis we have $P(F)\le 4A(F)$. Add another unit square $S$, then the boundary length of the new set will be $P(F)+4-P$, where $P$ is the boundary lenght of some open set $U$ inside $S$, more precisely, $U$ is the intersection of the interior of $S$ and the interior of $F$. Anyway, $U$ is the interior of a polygon, hence has rectifiable boundary. The area of $F\cup S$ is $A(F)+1-A$, where $A$ is the area of $U$. Problem 1 now tells us $P\ge 4A$. Together with the induction hypothesis this gives the claim. Q.E.D.

5
Area of intersection of a family of circles in the plane
17
Isoperimetric-like inequality for non-connected sets
17
The sparsest planar net that captures every unit segment
5
cover and hide with squares
5
Conditions for when an off-centre ellipsoid fits inside the unit ball
59
Which region in the plane with a given area has the most domino tilings?
5
Shape that balances isoperimetric ratio with invisibility
3
On some centers of convex regions based on partitions
Question feed