I have been looking into equivariant space-filling curves $S^1\to S^2$ as discussed by Cannon & Thurston in these two papers:

The Cannon-Thurston construction seems a little more delicate. In the first paper, near Theorem 5.7 we get

Thus we get a sphere-filling curve. The images supplied in Thurston's paper do not convince me they fill the sphere.

Nor does this picture look very sphere-filling. 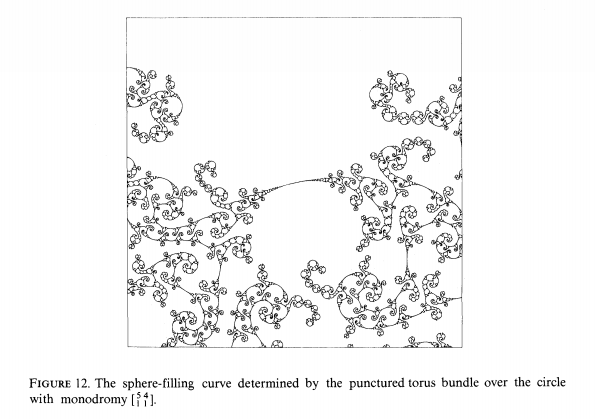 In what sense does the figure about fill the sphere and how is this related to Peano space-filling curve of $[0,1]^2$ ?

If you'd like to see a more explicit picture of these Peano curves in the case of cusped manifolds, check out the paper of Alperin, Dicks, and Porti (see also subsequent papers of Cannon and Dicks). They give a subdivision tiling in figures 16 and 17 of the paper which shows a better analogy with the Peano curve.

I'm not certain how Figure 12 was drawn, but I suspect it's a picture of a geometrically finite punctured torus group, which is "close" to being degenerate, but isn't actually, which might account for why it doesn't appear to be sphere filling.

As with any sequence, even say a sequence of rational numbers converging to a real number, there are important issues of convergence rate. "Connect-the-dots" approximations of Cannon-Thurston Peano curves converge rather rapidly for noncusped fibered 3-manifolds. But for cusped fibered manifolds they converge quite slowly. In Figure 12, right in the center is a cusp point, and the curve is actually differentiable exactly at the cusp point. The algorithm for drawing the connect-the-dots approximation is wasting lots of time near that cusp point (and others). Hence the lack of time to spend drawing any part of the curve that fills in the white spaces.

Not the answer you're looking for? Browse other questions tagged gt.geometric-topology ca.classical-analysis-and-odes or ask your own question.

12
Are there space filling curves for the Hilbert cube ?
7
Unusual Space-Filling Curve
5
Does the fundamental group of a surface have rigid subgroups?
20
Explicit homeomorphism between Thurston's compactification of Teichmuller space and the closed disc
0
Constructing Invariant Lamination of a Pseudo-Anosov Given By Dehn Twists
5
Conformal boundary and cusp of figure-8 complement
5
Geometry of a manifold after Dehn filling, in terms of geometry pre-filling
4
On Thurston's triangulations of sphere
Question feed