How to draw a Zoll surface?

I take into account that lots of questions on Zoll surfaces have already been asked on the forum. But I will stubbornly continue asking. Are there any chances to draw explicitely at least one Zoll surface which is not of revolution? Is there some addition to the not at all explicit argument of V.Guillemin who proves that there are many Zoll metrics on the sphere (functional parameter family)? Guillemin uses inverse function theorem to prove this fact so no hope for explicit calculations...

This is so strange, people do work a lot in the domain of Zoll surfaces although I do not find almost any pictures for this on Internet.

Additional questions that perturb me:

PS. I hope that this post could become a collection of the facts "known-by-now" on Zoll surfaces. I'm just getting lost in the abundance of information on the subject which is badly gathered. And I'm sorry that I do not have any picture in the post with the word "draw" in the subject.

Responding only to the "draw" aspect of your question, permit me to quote an answer to an earlier question ("Riemannian surfaces with an explicit distance function?"):

I found this elegant image of the Zoll cut locus in the paper "Thaw: A Tool for Approximating Cut Loci on a Triangulation of a Surface" by Jin-ichi Itoh and Robert Sinclair, Experiment. Math. Volume 13, Issue 3 (2004), 309-325: 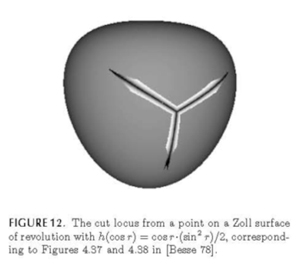 It is, however, a surface of revolution.

Here is another source, from this webpage by Konrad Polthier and Markus Schmies:

Their caption is: "A highly discretised Zoll's Surface with regions of strict negative curvature. The four discrete geodesics are almost closed. The curvature of the surface determines its color."

Let me answer your additional questions:

(1) Has somebody proven an existence of Zoll metric not close to the canonical one? (not by the "perturbation" argument? (2) Do we have any examples of Zoll metrics of arbitrary dimension without symmetries?

Yes, of course, there is a formula for the Zoll metrics of revolution (in dimension 2) which you already have seen in Besse where you can choose an almost arbitrary function $h$. (The function satisfies some conditions but is not necessary small). One can slightly generalize this example from Besse for the Lioville metrics on the sphere and also for Benenti metrics of arbitrary dimension. I will explain how without giving the formulas.

Recall that the Liouville metrics are such that the geodesic flow admits an integral of degree 2 in velocities. Benenti metrics are a generalisation of Liouville metrics for arbitrary dimension and they also admit integrals of degree 2 in velocities; in this case the integrals satisfy certain additional conditions which I will not describe here. Locally, one can write Liouville metrics in the form $(X(x) - Y(y)) (dx^2 + dy^2)$; there exists also a similar formula of Benenti metrics where you can choose $n=dim(M)$ functions of one variable which can be found in Google.

An example of a Zoll Liouville or Benenti metric is the standard metric of the sphere and one can change the functions $X$ and $Y$ (in the case of Benenti metric, you change $n$ functions) by essentially the same method as when you obtain Zoll metrics of revolution such that the new metric is still Zoll. It would have no symmetries though.

(3) What is known for Zoll metrics on the manifolds which are not $C^\infty$ smooth?

In the example from Besse or in the examples which I ``described'' above there are no local restriction on the functions you may choose. If your take them only $C^2$ smooth, the obtained metric will be also only $C^2$-smooth.

(4) Is there a book on Zoll surfaces that is more digestible that A. Besse's Manifolds all of whose geodesics are closed?

Not that I know of. The book of Besse is IMHO much more understandable than other advanced books in differential geometry.

Edited: I checked once more the example of Zoll metrics made with the help of Liouville metrics and it appears, contrary to what I wrote above, that
it always has a nontrivial symmetry. The symmetry group is $\mathbb{Z}_2$ so the metrics admits an isometry whose square is the identity. The set of the fixed points of this isometry is a circle.

If you want examples of Zoll (and also Tannery) metrics you will find some defined both on manifolds ($\Bbb S^2$) in fact and on some orbifolds (imagine a ``sphere" with a smooth south pole and a north pole having a conical singularity) in the following reference:

where you will find a mechanical approach (a physicist view) to the problem of determining the geodesics equations.

Not the answer you're looking for? Browse other questions tagged dg.differential-geometry ds.dynamical-systems or ask your own question.