Question : Is it also singly generated ?

I ask this question, because, on one hand I've read on this paper of V. Jones and D. Bisch :
"It thus makes sense to ask how many elements of $\mathcal{P}$ are required to generate $\mathcal{P}$ " 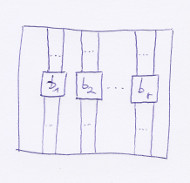 which generate $\mathcal{P}$, because $\forall i$ we can generate $b_i$ (up to rescaling), by applying a "trace" planar tangle on all the $j \ne i$ components of the box $B$: 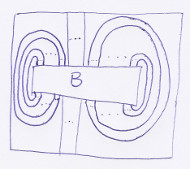 The above technique is used in Kodiyalam and Tupurani (arXiv:1003.4577), where they show all finite depth subfactors are singly generated. A more interesting question would be to find the smallest depth at which such a planar algebra is singly generated.

Not the answer you're looking for? Browse other questions tagged oa.operator-algebras subfactors planar-algebras or ask your own question.

6
Strong monotone limits and dense subalgebras of von Neumann algebras, again
3
What's the natural equivalence of subfactors in general?
2
Has a subfactor with lattice $B_3$, a singly generated identity biprojection?
Question feed