Is the tree of large cardinals linear?

Kanamori in the introduction of his book "The Higher Infinite" says:

"The investigation of large cardinal hypotheses is indeed a mainstream of modern set theory, and they have been found to play a crucial role in the study of definable sets of reals, in particular their Lebesgue measurability. Although formulated at various stages in the development of set theory and with different incentives, the hypotheses were found to form a linear hierarchy reaching up to an inconsistent extension of motivating concepts."

My question simply is:

Question: Is the tree of large cardinals linear? Precisely: Are there four large cardinal axioms like $\text{A}, \text{B}, \text{C}, \text{D}$ such that at least one of the following diagrams be true? 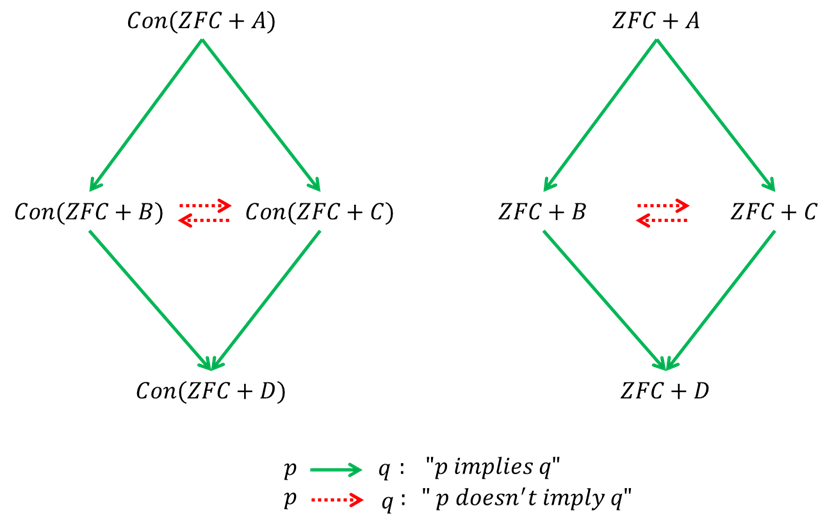 Note that in the current tree of large cardinals one can find some diamonds like above diagrams but we usually interpret this phenomenon as "unknown" situation not a possible "incomparablility" between large cardinal axioms. For example note to the following diagram: 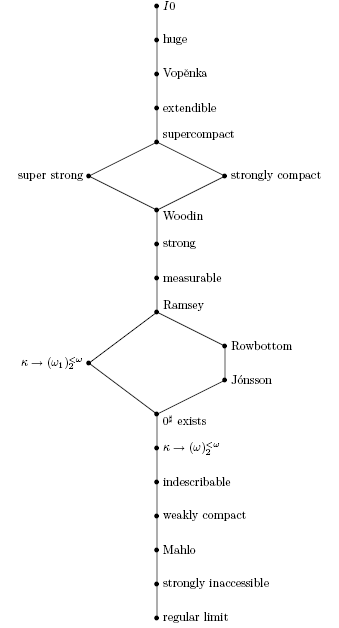 Let me just add to Andres excellent answer that The $\Omega$-conjecture of Hugh Woodin implies that all large cardinals are wellordered under the relation "implies the consistency of". This is a major line of investigation in Inner Model Theory. I recommend Woodin's "Suitable extender Models" (the introduction provides motivation to this problem).

This is the key question pursued by inner model theory. As far as we can prove, the consistency strength order is indeed linear (indeed, a pre-well-ordering), and we expect this will continue to be the case, at least as far as the large cardinals we currently use goes.

Rather than repeating myself and others here, let me make a suggestion: You can learn more about the consistency strength hierarchy in the writings and talks of John Steel, many of which are available at his webpage. There are also many answers on this website (by myself and others) addressing this question (for example, see here).

You should keep in mind that the right comparison is in terms of consistency strength, not in terms of outright implication or size. For example, the existence of $0^\sharp$ is a large cardinal statement, but it does not even imply the existence of inaccessible cardinals. However, it implies a proper class of weakly compact cardinals (and more) in $L$. Similarly, the first Woodin cardinal is not even weakly compact, but it implies the existence of many smaller weakly compacts. And the least strongly compact cardinal can be the first measurable, and it may exist in a universe without strong cardinals, though in consistency strength it is significantly beyond measurability or strongness.

All that being said, one can always come up with artificial large cardinal statements, coding Gödel-like statements that make them incomparable. It is understood that this is not what we are discussing here. Of course, there is a somewhat inherent vagueness in this claim, since I am not formally defining large cardinal, much less "natural" large cardinal. Consider it an empirical fact. But it is not just data without evidence. We have a significant body of results indicating that this ought to be the case.

Nor should you think this is exclusive to "large cardinals": The consistency strength hierarchy is much richer. We go from one rung of the ladder to the next by replacing a (sound) theory $T$ with $T+\mathrm{Con}(T)$, for example. This only takes us so far, and we have a significant jump if we require the existence of an $\omega$-model of $T$. And yet another significant jump if we ask for a transitive model.