I'm curious if anyone can see a route to get the Borsuk-Ulam theorem from Gromov's waist inequality. For the sake of notation, here's the inequality:

This inequality is quite strong. It implies the spherical isoperimetric inequality. It also implies topological invariance of domain. For more background, see Guth's survey The Waist Inequality in Gromov's Work.

Getting back to my question: If $n=k$ and the level set given by the inequality contains two points then taking $\epsilon = \pi/2$ gives the Borsuk-Ulam theorem. Can one arrange for this to always happen and hence derive Borsuk-Ulam?

Yashar Mermarian writes here that the answer is yes. And the argument he gives is pretty much the same as the one you already started.

This gives the following (weaker) version of a Bursuk Ulam type result: 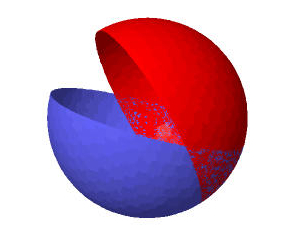 In the original paper Gromov is more careful. He writes:

In general $\operatorname{card}(f^{-1}(z))\leq 2$ is not true for arbitrary maps. And even if you perturbe $f$ a little bit this condition won't be fullfilled. Of course any two maps from $S^n$ to $\mathbb{R}^n$ are homotopic, so in particular $f$ will be homotopic to a map with $\operatorname{card}(f^{-1}(z))\leq 2$ for all $z$, but this doesn't really give you anything.

Not the answer you're looking for? Browse other questions tagged gt.geometric-topology mg.metric-geometry or ask your own question.

5
Is there a connection between |roots| $\rightarrow$ 1 and Gromov's waist theorem?