are there natural examples of classical mechanics that happens on a symplectic manifold that isn't a cotangent bundle?

I'm curious about just how far the abstraction to a symplectic formalism can be justified by appeal to actual physical examples. There's good motivation, for example, for working over an arbitrary cotangent bundle of configuration space -- because there are natural problems where the configuration space is not trivial. But what motivation is there, from a physical standpoint, for passing further still into the realm of non-exact symplectic manifolds or those that can't be realized as a cotangent bundle? By an exact symplectic manifold, I mean one where the symplectic form is exact, the differential of a 1-form.

(I also don't understand whether those two ideas -- non-exact symplectic manifolds and symplectic manifolds that can't be realized as a cotangent bundle -- are equivalent. The question was asked here, but I don't see a simple "yes" or "no." That could be because the answer isn't known, or it could be because I don't have a formal enough definition for 'sympletic manfiold that can be realized as a cotangent bundle.')

José Figueroa-O'Farrill gave a partial answer to this question in his answer here. He writes:

Not every space of states is a cotangent bundle, of course. One can obtain examples by hamiltonian reduction from cotangent bundles by symmetries which are induced from diffeomorphisms of the configuration space, for instance. Or you could consider systems whose physical trajectories satisfy an ODE of order higher than 2, in which case the cotangent bundle is not the space of states, since you need to know more than just the position and the velocity at a point in order to determine the physical trajectory.

I don't know much about symplectic reduction, but I don't see it as a very natural example, since there must have been a more fundamental problem that didn't demand a general symplectic manifold instead of a cotangent bundle. The example about ODEs of order greater than 2 is interesting. But I'm wondering if anyone can offer a fuller explanation about the role general symplectic manifolds play in physics rather than math. I suspect part of the story will be about quantization.

EDIT: I just saw this question on whether symplectic reduction can be considered "interesting from a physical point of view." Figured it was appropriate to link to here, although I'm still interested in any bigger-picture insights that don't have to do with reduction. 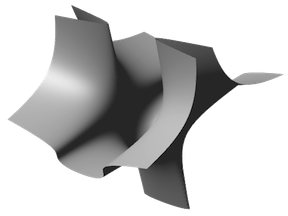 Remark. There exists also the examples of compact symplectic manifolds representing internal degrees of symmetries, as mentioned in Tobias answer. In the same spirit there is the Grassmannian manifolds ${\rm Gr}(2,n+1)$ of $2$-planes in ${\bf R}^{n+1}$, representing the space of un-parametrized geodesics on the sphere $S^n$. We can regard this space of geodesics as the space of light rays on the Euclidean sphere where the speed of light would be infinite.

On a conceptual point of view, I just finished to write a paper:

that proposes a way, based on diffeology, to understand the statement: "Every symplectic manifold is a coadjoint orbit".

(*) I published this paper on the origins of symplectic geometry, but in french, where Lagrange's construction is explained.

I think from the physical point of view, the question should be reversed. Symplectic and presymplectic manifolds naturally occur in physics because such geometric structures naturally follow from a variational formulation of the equations of motion of a mechanical system or field theory (see here). This variational character is indeed connected with quantization, but there is no need to go into that here. So the interesting question should be: when are symplectic manifolds occurring in physics actually cotangent bundles?

The answer is that happens naturally only if fairly special cases. Namely, the phase space (space of initial data with symplectic structure) of a mechanical system (some field theories can be considered as infinite dimensional mechanical systems) is a naturally a cotangent bundle when the system's equations of motion are second order in time, the kinetic term is non-degenerate and non-holonomic constraints are absent. I'm being a bit vague with the terminology, so let me briefly expand on these conditions.

If $Q$ is the configuration manifold, then the natural space of initial data for a $(k+1)$-st order ODE on $Q$ is the $k$-jet bundle $J^k(Q\times \mathbb{R})_{t=0}$, where $Q\times \mathbb{R} \to \mathbb{R}$ is the trivial bundle over $\mathbb{R}$ (time $t$) with fiber $Q$. It just so happens that, given a Lagrangian defined on $J^1(Q\times\mathbb{R})$, so that the equations of motion are second order, if the Legendre transform is well defined, it establishes an isomorphism $J^1(Q\times \mathbb{R})_{t=0} \cong TQ \cong T^*Q$. In other cases, it might be possible enlarge the configuration manifold to $Q'$ and then through a sequence of transformations on the equations of motion to show that $J^k(Q\times\mathbb{R})_{t=0} \cong T^* Q'$, but I would not necessarily call that identification natural.

If the kinetic term of the Lagrangian is singular (there is no invertible map between the canonical momenta and the velocities), then the Legendre transform is not well defined and, even in the $k=1$ case, the naive identification from the preceding paragraph fails. A cotangent bundle can make an appearance here as well, but only with constraints. That is, it is possible to extend the configuration space to $Q'$ and then ultimately the space of initial data can be identified with a quotient of a submanifold of $T^*Q'$ (submanifold defined by second and first class constraints, while the quotient is defined by the flow generated by first class constraints). So, while a cotangent bundle $T^*Q'$ is used in this construction, I would not say that the end result is naturally a cotangent bundle itself.

Finally, there are special situations where the constraints are holonomic. That is, it is possible to satisfy all constraints by simply restricting the mechanical system to a submanifold $Q''\subset Q$ of the original configuration manifold. Then, for second order equations with a well defined Legendre transform, the space of initial data is once again a cotangent bundle, $T^*Q''$. However, if the constraints are more complicated, that is, non-holonomic, the identification with a cotangent bundle once again fails.

So, as you can see cotangent bundles appear as phase spaces in physics only under special conditions. It so happens that there are many examples of simple mechanical systems that satisfy these conditions, but one does not need to go far to find examples that do not.

The classical phase space of the spin degrees of freedom is represented by the two-sphere with a symplectic form given by $s$ times the standard volume form. This is clearly no cotangent bundle to some configuration space (and in particular non-exact). Geometric quantization results in the well-known quantization $2s \in \mathbb{Z}$.

By the way, examples arising from symplectic reduction are very natural and important. Often this is the only procedure available to endow a space with a symplectic structure.

Nothing seems to be more standard and classical, on the other hand, we can quickly come from it to symplectic manifold $CP^{n-1}$ (which is NOT exact) via Hamiltonian reduction. On the other hand the person with classical taste probably can object that there is nothing about this example which can be said without symplectic manifolds and reductions. So it seems a matter of taste, whether this example qualifies. Let me nevertheless consider some details.

Since system is Hamiltonian, the energy is preserved so the movement of particle can be restricted to submanifold $ H= R^2$, it is $2n-1$ sphere. Now the trajectories of particle are actually closed circles $S^1$ which fiber $S^{2n-1}$. If we look we a little attention we will see that if one factorizes. $S^{2n-1}$ over $S^1$ we will get closed manifold, which is actually complex projective space $CP^{n-1}$. The main point of Hamiltonian reduction is that we can naturally descend the symplectic form from big manifold (R^2n) to its symplectic quotient ($CP^{n-1}$).

Now, in what situations one may care about all this stuff. Consider you have, not just one Hamiltonian $H$, but you also have another $H_2$, which is:

In that situation you precisely make Hamiltonian reduction - get $CP^{n-1}$, which is symplectic manifold, and restrict $H_2$ there. So you somehow killed $H$ and you can work ONLY with "complicated" $H_2$.

To say the truth I do not know examples where such approach might be practically useful. But at least in theory it looks like this.

Moreover modern times we see dominating number of examples, where we should go in the opposite direction - we take some complicated manifold, and find the way to present it as Hamiltonian reduction of some more simple manifold, and solve the problems "upstairs".

Here is a recent example which I enjoyed. Joris Vankerschaver and Melvin Leok studied point vortices on the sphere (A Novel Formulation of Point Vortex Dynamics on the Sphere: Geometrical and Numerical Aspects). This may have applications in geophysical fluid dynamics where conservation of circulation plays a role. In anycase, the symplectic manifold of concern is $S^2$ with the volume form. The non-exactedness of this symplectic manifold provides a problem when one desires to construct a variational integrator (as the nature of variational principles in such spaces is tricky). They ultimately invokes the Hopf fibration $\pi: {\rm SU}(2) \to S^2$ to pull-back the dynamics to ${\rm SU}(2)$ which allows one to use do everything on a closed symplectic manifold.

Not the answer you're looking for? Browse other questions tagged mp.mathematical-physics sg.symplectic-geometry examples intuition hamiltonian-mechanics or ask your own question.

33
Is symplectic reduction interesting from a physical point of view?
33
When is a symplectic manifold equivalent to a cotangent bundle?
30
How to see the Phase Space of a Physical System as the Cotangent Bundle
24
Hamiltonian, Lagrangian and Newton formalism of mechanics
5
The Lagrangian formulation of mechanics without going through variational principles.