Can the sphere be partitioned into small congruent cells?

On the unit $2$-sphere ${\mathbb S}^2$ furnished with the geodesic distance, a subset homeomorphic to a planar disk is called a cell. A finite family of cells is a tiling if their interiors are mutually disjoint and their union is the whole sphere. My main question is:

(1) Can the sphere be tiled by congruent cells of an arbitrarily small diameter? If not, how small can the diameters of the cells be?

An obvious example of a tiling with arbitrarily many congruent cells is obtained by cutting the sphere into $n$ sectors by $n$ uniformly spaced great semicircles, each connecting the North and the South poles. Since the cells' diameter is $\pi$ - the same as the diameter of the whole sphere, they cannot be called small by any means.

A somewhat less obvious example is constructed as follows. Consider the $4k$-faceted polyhedron inscribed in the sphere, consisting of a $2k$-faceted antiprism ($k\ge3$) capped off by two pyramids, as shown below for $k=18$. With the properly chosen altitude of the antiprism, all $4k$ (isosceles-triangular) facets become congruent by design. 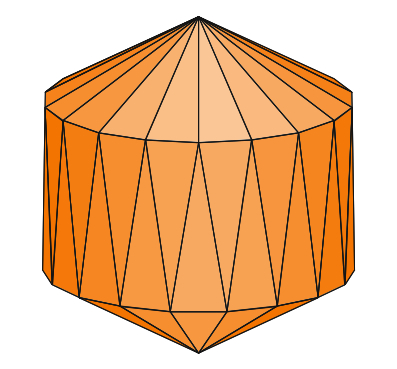 The central projection of the facets to the sphere produces a tiling of the sphere with $4k$ congruent, isosceles-triangular cells of diameter considerably smaller than $\pi$, but greater than $\pi/3$ and converging to $\pi/3$ as $k\to\infty$.

In the special case of $k=5$, the inscribed polyhedron is the regular icosahedron. In this case, if each of its $20$ equilateral triangular facets is barycentrically partitioned into 6 triangles, the central projection to the sphere yields a tiling with $120$ congruent, triangular cells of diameter well below $\pi/3$. No better examples are known to me, which raises the following, specific two questions:

(2) Is there a tiling of the sphere with an arbitrarily large number of congruent tiles, each of diameter $d\le\pi/3$?

(3) Is there a tiling of the sphere with congruent cells of diameter smaller than that in the subdivided-dodecahedral $120$-cell tiling described above?

Not an answer. But permit me to draw attention to Robert J. MacG. Dawson's website on congruent sphere tilings, including this beautiful tiling by triangles: 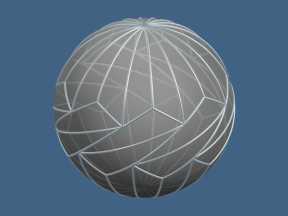 9
What is determined by the combinatorics of the shadows of a convex polyhedron?
6
Delaunay triangulations and convex hulls
2
Choosing the weights of a Voronoi diagram -- is this function always the gradient of another function?
34
Tiling the plane with incongruent isosceles triangles
6
Splitting the $n$-cube into two small congruent convex halves
5
Cutting the unit square into pieces with rational length sides
4
Structures for random graphs with structure
Question feed