Maximal Antichains in a Colored Tree

Consider the full $m$-ary tree of height $k$ with root node $\emptyset$. Branches in this tree can be considered as functions $f:k\rightarrow m$ and nodes of the tree as total functions $\hat{f}:k'\rightarrow m$ ordered by extension (where $k'\leq k$).

Define a coloring $\mathcal{C}$ of the nodes in the tree inductively:

The intuitive idea here is that 1 is a "good" color (say white), 3 and 4 are non-neutral colors (say red and blue) and 0 is a "bad" color (say black). The inductive step "mixes" colors by "painting over" the original color of the node given by $c$ using the color of the node immediately preceding it. Given a node at stage $n+1$, let's call it $p$, $\mathcal{C}$ will re-color $p$ as follows:

Now consider a maximal antichain in the colored tree. We will ignore all nodes in this antichain that are colored either red or blue. Under what circumstances are the remaining nodes split even among white and black? It is relatively easy to find such maximal antichains, but all of the ones I've been able to construct are "skewed" in some way in the tree (i.e., they are not very nice, in a sense).

I do know at this point that there is always a minimum level of the colored tree where the number of black nodes at that level is strictly greater than the number of white nodes at that level. And this will be true for every higher level as well. So the question is: could the level immediately below this minimum level have the property I'm seeking.

I conjecture the answer is NO but so far can't establish this.

Edit: I should mention that I intend $k>2$ and the surjective condition for the initial coloring $c$ requires $m\geq 3$.

For clarification, note that the "original" color of a node only depends on whether it is the first, second, etc. child of the parent node not its position in the tree.

There will never be a Black node at level 1. They start appearing at level 2 and from then on, they grow at an enormous rate; much faster than the white nodes but not as fast as $m^n.$

The recolouring scheme can be described as follows. The colours correspond to the elements of the poset of subsets of $\{1,2\}$ ordered by inclusion, with white at the bottom and black at the top. The final colour $\mathcal C(v)$ of a vertex is the supremum of the colours of its ancestors. The number of white and black vertices on each level can then be calculated explicitly using inclusion-exclusion.

Edit: Everett Piper points out below that, for $n > 3$, there are no solutions by Fermat's Last Theorem. So $2rb=w^2$ characterises the colourings for which some level is good precisely.

I'm preserving the original answer below the line so that the comment history makes sense.

Is this a construction that produces half white and half black on the level with 4 vertices? 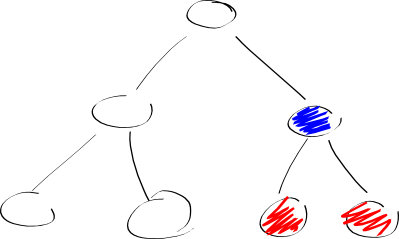 2
Completion time of a process on a tree
2
Counting growing tree trajectories
8
Probability of good colorings in randomly-colored graphs
5
Fraction of the sets receive each color
11
Graphs with only disjoint perfect matchings, with coloring
6
3-colored triangulations of the sphere $S^2$, and Sperner's Lemma
Question feed