UPDATE: I created a simple web-application, that allows the user to move waterpoints around, then automatically calculates a maximum set of interior-disjoint squares between the points (the algorithm is exponential so it works only up to about $n=11$ points).

There are $n$ waterpoints in an infinite desert. Assume each waterpoint is a point in $\Bbb R^2$, and the x and y values of the points are all different.

Define a paradise as an axis-aligned square which touches at least two waterpoints.

Define $p(n)$ as the maximum number of interior-disjoint paradises in the worst possible arrangement of $n$ waterpoints. What is $p(n)$? 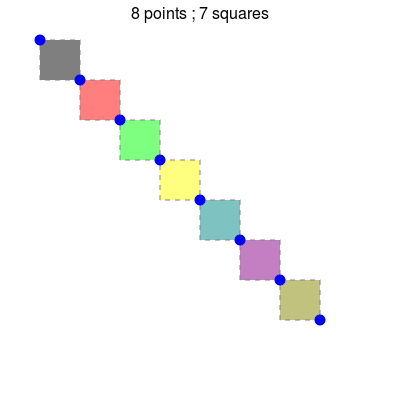 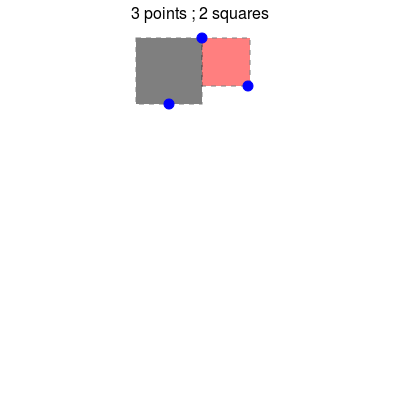 This cutting scheme doesn't work anymore when $n>5$, because if we end up with 3 waterpoints in a quarterplane, it might be impossible to have 2 paradises.

On the other hand, in all cases that I checked, I always managed to find $n-1$ paradises.

So the question is: is it always possible to have $n-1$ paradises, for every $n$? If so, how? If no, what is the minimum?

Several months ago I published a similar question in math.SE, with a major difference: instead of an infinite desert, there was a finite (square) cake (i.e. all points and squares should be within a large predefined square).

With the help of an answer from prof. Boris Bukh, I managed to prove an upper bound of: $$p(n) \leq \lceil{n \over 2}\rceil - 1$$ The proof was by constructing a set of $n=2k$ points, that are organized such that it is not possible to put more than $p=k-1$ squares. The following figures illustrate the construction for $k=6$:

Now I am trying to adapt these results to the infinite desert case.

The upper bound construction crucially relies on the assumption that the cake is bounded in at least two adjacent directions. It can work in a quarter-plane, but not in an unbounded desert ($\Bbb R^2$).

The lower bound algorithm will obviously work in an infinite desert, however, after only a single iteration, we will have 4 quarter-planes, and thus the lower bound will not be much better than in the bounded-cake case.

After a lot of playing around, I found this counter-example with $n=6$ points and only 4 squares. This link alone is not a sufficient proof because there might be a bug in my function that calculates the maximum disjoint set. So here is a formal description of the arrangement, and an attempt to prove that indeed no more than 4 squares are possible: 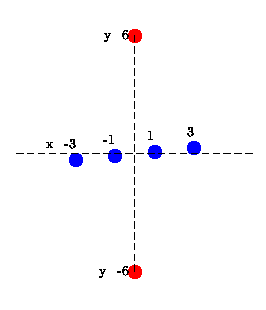 Second, consdier the point at the top of the y axis (red). Any square that uses this point must have a side-length of at least 6 in order to approach the x axis. Any such square necessarily blocks at least two of the cyan squares above the x axis. Additionally, the leftmost square is slightly larger than 6 and thus also blocks the middle cyan square below the x axis. The two extreme options are plotted below in magenta: 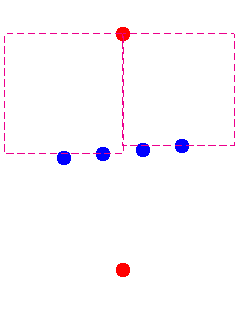 The case for the point at the bottom of the y axis (red) is the same.

All in all, a maximum set of disjoint squares can be drawn in only the following ways (ordered in an increasing order fo the number of magenta squares):

This construction can be duplicated and translated a long distance to the left and bottom (for example). For every duplication, we get more 6 points and more 4 squares, but an additional square can be added between two adjacent duplicates. This gives a bound of: $p(6k)\leq 5k-1$ for every integer $k$, i.e. $p(n)/n \lesssim 5/6$.

Not the answer you're looking for? Browse other questions tagged mg.metric-geometry extremal-combinatorics or ask your own question.

10
Ordered geometries from convex subsets of the plane
2
Mid point with set square?
5
cover and hide with squares
8
2-layer tilings with a center-of-gravity constraint
20
Is there always a maximum anti-rectangle with a corner square?
29
Can R^3 be expressed as a disjoint union of pairwise linked circles?
20
Is every elementary absolute geometry Euclidean or hyperbolic?
1
Repeatedly halve and twist a planar shape: Limiting shape?
2
Number of bitangents to convex polytopes
Question feed