Domination of length functions of trees with equal covolume

(This is a reformulation of an earlier unanswered question. I would like to thank Ian Agol for pointing out to me Walter Parry's characterization of hyperbolic translation length functions.)

Suppose $S$ is a metric $G$-tree of covolume $1$ (ie the sum of the edge lengths in $G\backslash S$ is equal to 1). Now suppose that $T$ is obtained from folding together two adjacent edges in the same $G$-orbit, as follows:

This operation doesn't change the underlying graph of the quotient, so $T$ still has covolume equal to 1.

For a specific example, let $G$ be the free group $\langle a,b\rangle$, and let $S$ be the Bass--Serre tree of the HNN extension

where $b$ is the stable letter. Now let $T$ be the Bass--Serre tree of the HNN extension

where, again, $b$ is the stable letter. Note that the commutator $[a,b]$ has strictly smaller translation length in $T$ than in $S$---indeed, it's hyperbolic in $S$ but elliptic in $T$.

Here is a counterexample (unfortunately):

We give the two graphs of groups the same metrics. Equivariantly folding the two branching edges in the Bass-Serre covering $T_1$ gives rise to an equivariant 1-Lipschitz map from $T_1$ to $T_2$ and hence we have $l_{T_2}(g)\leq l_{T_1}(g)$ for all $g\in G$. Now observe that the graph of groups of $T_2$ can be obtained from the graph of groups of $T_1$ by an elementary collapse followed by an elementary expansion. Elementary deformations do not create new elliptic subgroups, whence $l_{T_1}(g)=0\Leftrightarrow l_{T_2}(g)=0$.

However, if we give each edge length $1/3$, the hyperbolic group element corresponding to the upper loop followed by a backtrack along the connecting bridge has translation length $1$ in $T_1$ and length $1/3$ in $T_2$.

The two trees are in fact non-abelian (they are irreducible), as the fundamental groups of their graphs of groups contain a free group of rank 2 acting freely. 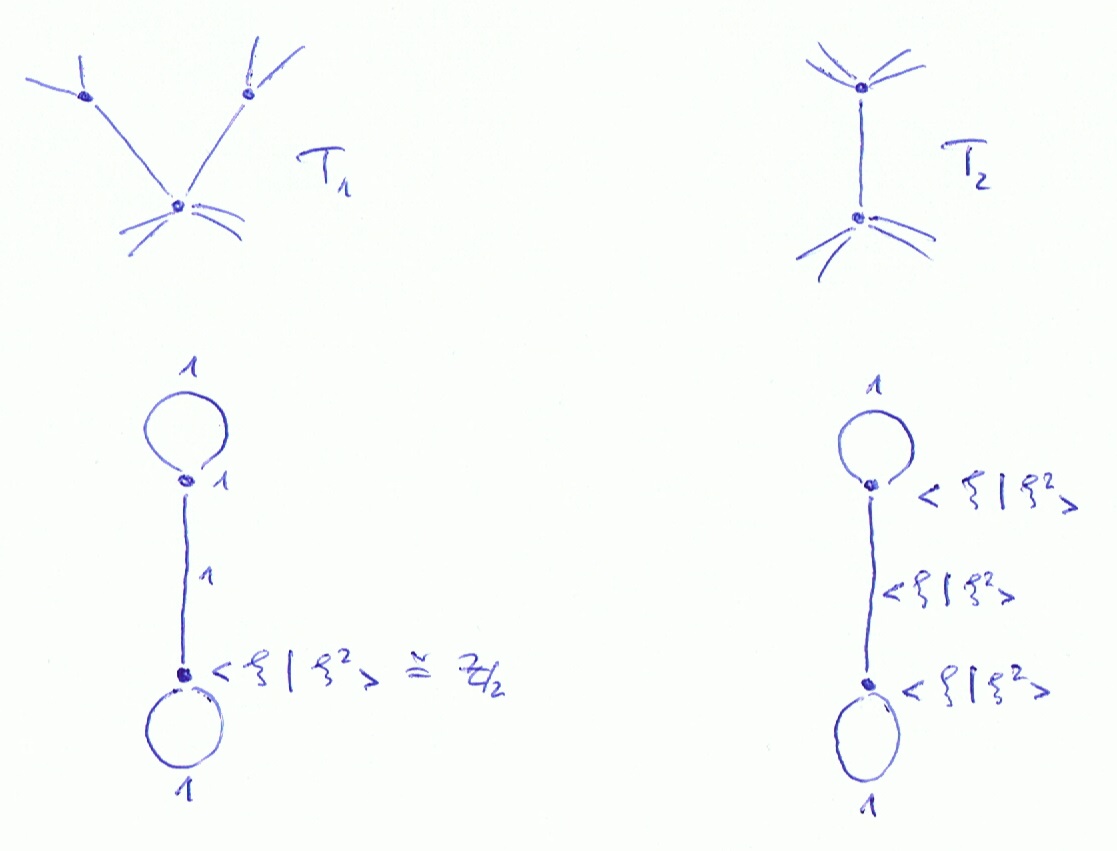 We are interested in isometric actions of a fixed finitely generated group on R-trees. Using metric methods inspired by Gromov’s work, we define a more geometric topology on sets of such objects. We prove it to be the same as the Morgan-Shalen topology, defined by the translation lengths of the group elements, in the case of minimal irreducible actions.

Not the answer you're looking for? Browse other questions tagged gr.group-theory gt.geometric-topology geometric-group-theory or ask your own question.