Is using a normal distribution appropriate and correct? Would an Erdos-Kac description be more appropriate? Original Element data are available here.

Here is a plot of the data Stuart listed for order 32 (now incorporating his two corrections): 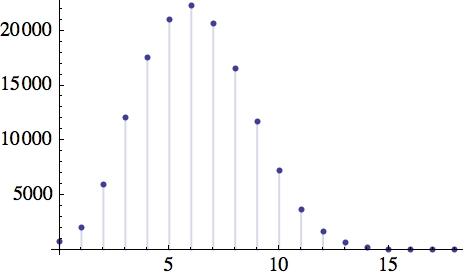 I wrote a program (randorder32v4.cpp) which randomly generated a file of numbers satisfying the following conditions;

The program randorder32v4 took about an hour to run

My bk2prime program processes the 144161 lines and outputs them in a modified form, where the composite numbers only are replaced with 0's and the order, sum of composites and sum of primes for each solution line of elements is given at the end of each line. The prime decomposition file is then loaded into a spreadsheet and using the COUNTIF function the number of lines with a given number of primes is arrived at.

The distributions look quite similar to the order 32 SPSS distribution. The hypothesis that the prime elements are distributed randomly among the elements has some confirmation and has not been falsified by the 2 program runs. Tiling squares with smaller squares imposes a topological structure on the elements, in practise this would eliminate most, if not all of the random solutions generated here as actual tilings, so the prime distributions seem to be determined by number theoretical considerations, not topological ones.

Not the answer you're looking for? Browse other questions tagged nt.number-theory pr.probability mg.metric-geometry or ask your own question.