Are there locally jammed arrangements of spheres of zero density?

I know of a remarkable result from a paper of Matthew Kahle (PDF download), that there are arbitrarily low-density jammed packings of congruent disks in $\mathbb{R}^2$:

In 1964 Böröczky used a subtle disk packing construction to disprove a conjecture of Fejes Tóth, that a locally jammed arrangement of disks in the plane, one where each disk is held in place by its neighbors, must have positive density.

Surprisingly (to me), this natural candidate is not the lowest density: 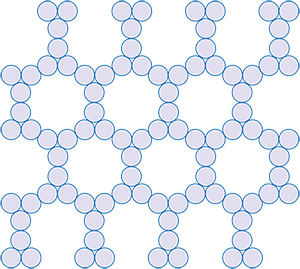 My question is whether or not Böröczky's construction extends to $\mathbb{R}^3$ and higher dimensions. (I do not yet have access to Böröczky's 1964 paper.)

Addendum. (I add this prompted by user j.c.) My question is answered: Yes. First, through the help of Wlodek Kuperberg and other commenters, we learned what exactly is Böröczky's 1964 zero-density packing. Indeed it is "subtle" as Matthew Kahle said. Second, simply layering identical copies of that packing of spheres in $\mathbb{R}^3$ results in a jammed packing of zero density, as confirmed by Benoît Kloeckner. What remains is to correct Wikipedia's misleading entries on the topic, as detailed by Gerry Myerson.

Wlodek Kuperberg sent me this 'diagram from the "Lagerungen"' of Böröczky's packing, over which I overlaid several congruent disks: 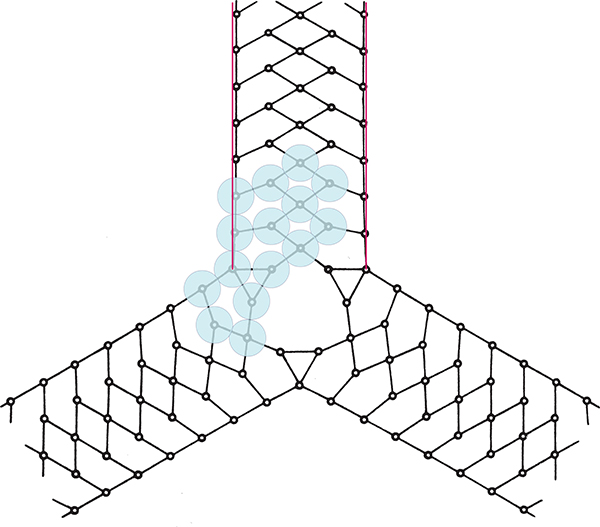 (Yes, small cracks or overlays are visible between disks that should be tangent. The diagram is not 100% metrically accurate.)
Added: The vertical red lines suggest a slight concavity.

Wikipedia says, "The locally jammed sphere packing with the lowest density has a density of only 0.55536," and refers the reader to Martin Gardner's New Mathematical Diversions from Scientific American, Chicago: University of Chicago Press, 1983, pp. 82–90, ISBN 0-226-28247-3.

Aleksandar Donev has a presentation, Jamming in Hard-Sphere Packings; on slide 49, it says, "There are locally jammed packings of vanishing density (covering fraction) (K. Baroczky)." It may be that this is intended to apply in two dimensions only, but this is not evident from the context.

I am aware that the two paragraphs above appear to contradict each other.

Another reference: Torquato and Stillinger, Jammed hard-particle packings: from Kepler to Bernal and beyond, write on page 38, "Another important distinction is that it is possible to pack spheres subject only to the weak locally-jammed criterion, so that the resulting packing fraction is arbitrarily close to zero." They cite Boroczky, and also Stillinger, F. H., S. Torquato, and H. Sakai, 2003, Lattice-based random jammed configurations for hard particles,” Phys. Rev. E 67, 031107.

EDIT: I'm looking at the Martin Gardner essay. On page 88, he wrote,

"In his Geometry and the Imagination, first published in Germany in 1932, David Hilbert describes what was then believed to be the loosest [locally-jammed] packing [of spheres]: a structure with a density of .123. In the following year, however, two Dutch mathematicians, Heinrich Heesch and Fritz Laves, published the details of a much looser packing with a density of only .0555 [see Fig. 34]. Whether there are still looser packings is another intriguing question that, like the question of the closest packing, remains undecided."

This suggests that the number given in Wikipedia is a typo. 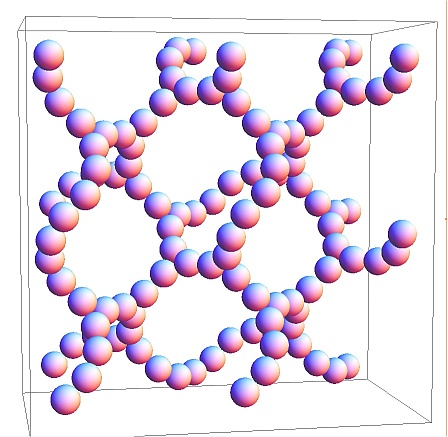 Not the answer you're looking for? Browse other questions tagged mg.metric-geometry sphere-packing circle-packing or ask your own question.

1
Thinnest rigid packings of the plane

8
Are there arbitrarily sparse "lattices" in negatively curved symmetric spaces?
21
Are there smooth bodies of constant width?
2
What are some properties of Delone sets that come from Barlow packings of spheres?
4
Is there an "accepted" jamming limit for hard spheres placed in the unit cube by random sequential adsorption?
3
Are there isomeasure simplices?
2
New Perfect 2-bit Error Correction Code - Are there any other?
3
Examples of (non-discrete) hyperbolic totally disconnected locally compact groups whose boundaries are spheres
7
Are there any convex pentagonal rep-tiles?
Question feed