What is the amplituhedron?

The paper ”Scattering Amplitudes and the Positive Grassmannian” by Nima Arkani-Hamed, Jacob L. Bourjaily, Freddy Cachazo, Alexander B. Goncharov, Alexander Postnikov, and Jaroslav Trnka, introduces a remarkable new way for computations in quantum field theory based on volume computations of certain polyhedra. This and related works may also have profound implications for the foundation of particle physics. It is related to various beautiful mathematics, and, in particular, to the combinatorics of certain stratifications of the Grassmanians.(See also the Quanta Magazine article, A Jewel at the Heart of Quantum Physics, by Natalie Wolchover, and Nima Arkani-Hamed’s on-line SUSY 2013 video lecture The Amplituhedron.)

The amplituhedron is remarkable new subsequent geometric object which comes in this study extending the notion of "positive grassmanian." (I did not see it explicitly defined in the above paper, at least not by this name.) It is very briefly described in Arkani-Hamed's lecture. 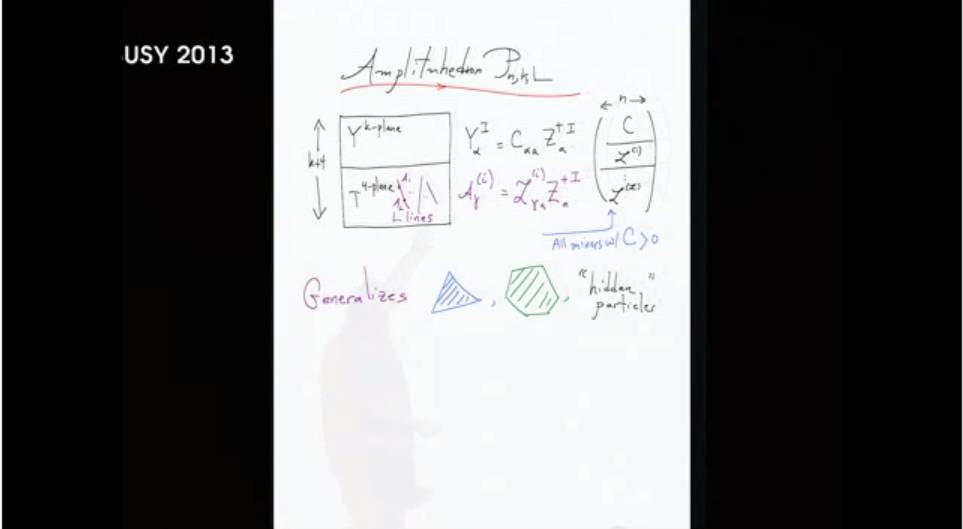 My question is quite simple:

what is the mathematical definition of the amplituhedron?

An older-sister MO question: The amplituhedron minus the physics

Update: The paper The amplituhedron by Nima Arkani-Hamed and Jaroslav Trnka is now on the arxive.

I would think that this presentation by Jaroslav Trnka, given here in Utrecht, goes at least some way towards a mathematical definition of the amplituhedron.

To skip the physical motivation, start at page 13; jargon abbreviations such as NMHV = "next-to-maximally helicity-violating" can be ignored (they relate only to the physical significance of the construction). The construction of the amplituhedron $P_{n,k,m}$ is summarized on page 23. What follows on later pages is the description how to associate a form $\Omega_{n,k,m}$ to the space $P_{n,k,m}$ and use this to calculate the required physical quantity (a scattering amplitude).

My attempt to parse a definition of the amplituhedron from Trnka's presentation:

There is now an AMS Notices article whose title is the same as the title of this question (and which therefore may be enlightening to anyone on this page): http://www.ams.org/journals/notices/201802/rnoti-p167.pdf

In addition to Carlo Beenakker's wonderful answer: it seems Penrose's twistor formalism (twistor diagrams) plays a central role in this amplituhedron business. See http://www.twistordiagrams.org.uk/papers/index.html for the description of historical developments that led to the discovery of amplituhedron. Other useful information can be found at http://ncatlab.org/nlab/show/amplituhedron

Let me give a brief version of an answer I posted on Joe's sister question.

Alexander Postnikov gave a detailed series of lectures on the positive Grassmanian at the Hebrew University of Jerusalem (see links below). He also briefly referred to the amplituhedron.

Folowing Postinkov, I can briefly explain the situation as follows:

A) The stratification of the positive Grassmanian:

Regard the Grassmanian as represented by equivalence classes of $m$ by $n$ matrices ($m \le n$) under row operators. The non-negative Grassmanian is the set of totally-non negative matrices namely those where all $m$ by $m$ minors are nonnegative. It has an important cell-like structure that can be defined by regarding two matrices in the same cell if whenever an $m$ by $m$ minor of one matrix is zero so is the corresponding matrix of the other.

Recall that every polytope is a projection of a simplex and projections with respect to totally positive matrices give precisely the cyclic polytope.

Update: Some more details and links can be found in the blog post The simplex, the cyclic polytope, the positroidron, the amplituhedron and beyond.

72
The amplituhedron minus the physics
8
What is the "Tangle" at the Heart of Quantum Simulation?