Let $V$ be a vector field on $S^3$ such that its singularity points, namely the points at which the vector field vanishes, are only sinks or sources (i.e. the field is converging or diverging). Is there an upper bound on the number $N$ of sinks and sources? Is this number 2? Is it possible that N=1?

There are examples of non-singular fields (Hopf fibering) for which N=0 and simple examples with N=2 (gradient of height function). I am asking if there are other possibilities.

The analogous question on $S^2$ has negative answer by the Poincaré-Hopf theorem which states that N=2.

Here is my attempt: If there is an integral curve of the vector field which joins a source A with a sink B then every integral curve from A must end in B (intuitively, this follows from an argument on connectedness of the boundary of a small ball centered at A) thus in this case N=2, and we are left with the possibility that all the sinks and sources are 'separated' by invariant sets, but is this really possible?

This is not possible if the sources and sinks form a Morse decomposition. That means that there are no other invariant sets of the flow of the vector field. This happens if one can find a function $f:S^3\rightarrow\mathbb{R}$ that strictly decreases along the flow, except at the sources and sinks. For example if the flow is the gradient flow of a function (not necessarily Morse). The Morse-Conley relations state that, for a Morse decomposition of the three sphere

However, it is possible if the sources and sinks do not form a Morse decomposition. I think I found an example of a vector field on $S^3$ with two sources, two sinks, and one periodic orbit. The idea is to start with the standard heightfunction, and change the sink into two sinks, a source and a periodic orbit, using a Hopf bifurcation.

Replace the a neighbourhood of the source of the standard height function by the vector field whose flow lines are like this: 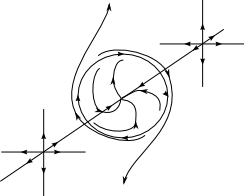 Lemma 3.4 of this paper based on the main Theorem of this paper ensures that for any $K\in \mathbb{N}$, there exists a smooth flow whose singularities are composed of $K$ sinks and $K$ sources.

Actually, we can construct such a flow directly.

Here, I only provide the main ideas.

(If this is true, one can glue $W$ and $W'$ along $\Sigma$ (in some sense Heegaard splitting), then glue some neighborhoods of sinks and sources to form $\phi_t$ on $S^3$ in the Claim.Here $W'$ is $W$ with converse orientation).

Suppose a vector field V on S3 has K > 0 source singularities and L sink singularities, and no others. Then by the Poincaré-Hopf index theorem, K - L = 0, so K = L.

Now for each singularity, remove a small neighborhood chosen so that its boundary 2-sphere is transverse to V. Let this new manifold-with-boundary be called W. Its boundary ∂W equals 2K copies of the 2-sphere.

Thus V restricted to W is a nowhere-vanishing vector field that points inward on K boundary components (∂-W) and outward on the remaining K of them (∂+W).

Not the answer you're looking for? Browse other questions tagged gt.geometric-topology ds.dynamical-systems 3-manifolds or ask your own question.