The Teichmüller's algebraic interpretation of $H^3$ in group cohomology

So here is my question, which is this algebraic interpretation of $H^3$ in group cohomology? Or, in another way, which was the algebraic context in which Teichmüller was working to arriving to $H^3$?

Teichmüller's article appeared in 1940 in the wartime journal $\mathfrak{Deutsche}$ $\mathfrak{Mathematik}$ (of which I've seen copies in the Tata Institute library in Bombay). He is trying to extend the Galois correspondence (between subextensions of $E\mid F$ on the one hand, and subgroups of the Galois group $\mathrm{Gal}(E\mid F)$ on the other, where $E\mid F$ is a Galois extension of fields) to a non-commutative context, where the extension $E$ is replaced by an associative (but not necessarily commutative) $F$-algebra $A$. So given such an $F$-algebra $A$, he is looking for a correspondence between sub-$F$-algebras of $A$ and subgroups of the group $\mathrm{Aut}_F(A)$.

An account of Teichmüller's paper can be found in the doctoral thesis (La naissance de la cohomologie des groupes) of Nicolas Basbois available at the archives ouvertes. Here is a quotation from this thesis:

The Eilenberg-MacLane paper [73] can be found in the Transactions, 64 (1948) 1, 1--20. Teichmüller's contribution is explained in the first paragraph of the introduction as follows: 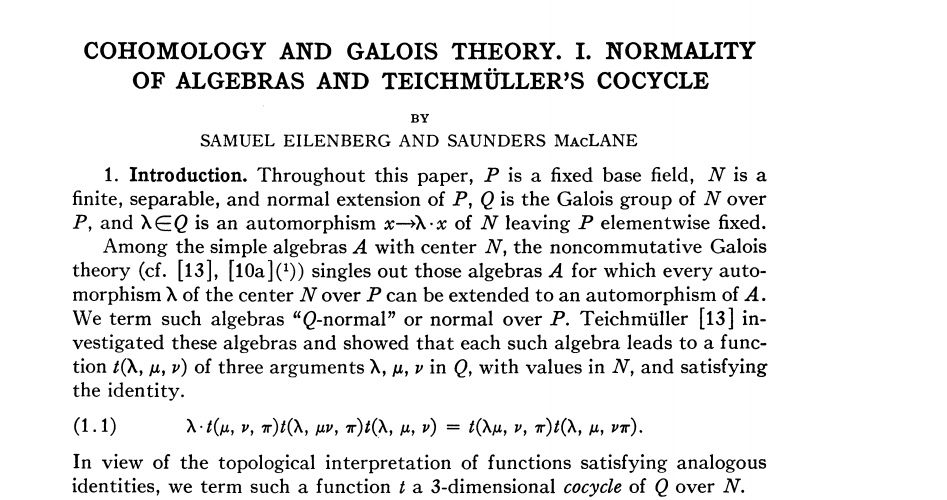 I cannot give the relation with Galois Theory, or Teichmuller's algebraic background, but the relation you quote crops up in terms of the Homotopy Addition Theorem (or Lemma) for the boundary of a $4$-simplex. You can find this theorem in the book of G.W. Whitehead on "Homotopy Theory", but somewhat confusing in proof, and he does not recognise the algebraic background in terms of crossed complexes. These were defined by Blakers (Annals, 1948) under the term "Group system", and this formula appears there, for the single vertex case. Actually the first proof appears in

"Group systems" were called, in the free case, "homotopy systems" and further developed by J.H.C. Whitehead in his paper "Combinatorial Homotopy II" (1949), which has some important theorems on the homotopy classification of maps, and a statement and proof of a theorem on free crossed modules.

Brown, R. and Sivera, R. "Normalisation for the fundamental crossed complex of a simplicial set". J. Homotopy and Related Structures, Special issue devoted to the memory of Saunders Mac~Lane 2 (2007) 49--79.

The $n$-simplex $\Delta^n$ is a cone on the $(n-1)$-simplex. The category of crossed complexes has a tensor product and a unit interval object and so a cone construction. Working this out for the fundamental crossed complex $\Pi \Delta^n_*$ of the filtered space $\Delta^n_*$ gives the Homotopy Addition Lemma. (One needs the not so simple result that for CW-complexes and skeletal filtrations $\Pi(X_* \otimes Y_*) \cong \Pi X_* \otimes \Pi Y_*$.)

This "Teichmuller" formula occurs in group cohomology in terms of the standard free crossed resolution $F_*(G)$ of a group $G$, defined in

You can get an intuitive understanding of the boundary $\delta_3$ by drawing an ordered $3$-simplex, $\tau$, labelling all the edges, and then writing down a loop going once round every face. Since a face $\sigma$ has a boundary $\delta_2 \sigma$ of the form $c^{-1}ab$, you can then work out a version for $\delta_3 \tau$, noting that one of the faces of $\tau$ has base point not at the base point of $\tau$. This is why it is sensible to use groupoids so as not to collapse geometric information.

I thought I should give a picture of a $4$-simplex of the nerve of a group: 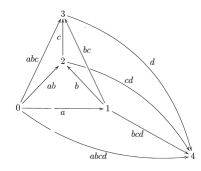 September 25: Of course the Teichmuller formula is actually of the form $\xi \delta_4=0$ where $\xi $ is a function on the $3$-simplices of the nerve $N(G)$, which in his notation are written $(\lambda,\mu, \nu)$. A formula for $\delta_4$ is given by the Homotopy Addition Lemma, and its details depend on some conventions. In the case of the cited Brown-Sivera paper, those conventions are determined by the formulae for the tensor product of crossed complexes, which are related to orientation conventions for the cell decomposition of $E^m \times E^n$ where for $m \geq 2$, $E^m=e^0 \cup e^{m-1} \cup e^m$.

A full account of the background on crossed complexes is given in the book described here.

In "Normality of algebras over commutative rings and the Teichmüller class. I" (II, III, arXiv version 1512.07264), Hübschmann constructs an explicit crossed module representing the Teichmüller cocycle and, among other things, reinterprets in terms of it the Deuring extension obstruction which seems to have been the original motivation of Teichmüller: very roughly, given an algebra $A$ with a group action, one seeks an embedding $A\subset C$ into a larger algebra which realizes the action via conjugation by (invertible) elements of $C$. You can find lots of references to previous work there, although, it seems, nobody before considered the corresponding crossed modules.

What I find especially interesting, in the third of these papers Hübschmann explains how this construction relates to Dixmier-Douady classes and work of Jones, Rieffel and others concerning group actions on C*-algebras, crossed products of von Neumann algebras and such.

Not the answer you're looking for? Browse other questions tagged homological-algebra ho.history-overview group-cohomology class-field-theory galois-cohomology or ask your own question.