What is the “Tangle” at the Heart of Quantum Simulation?

The following questions generalize and naturalize the question that was originally asked. Provisional answers largely due to Will Sawin are now included.

As was discussed in the question originally asked, let $$\mathcal{L}(r,\{a_i\})\ {\colon}{=}\ \sigma_r\big(\text{Seg}(\mathbb{P}^{a_1-1}\times\cdots\times\mathbb{P}^{a_n-1})\big) \subset \ \mathbb{P}^{(\Pi_{i=1}^n a_i) -1}$$ be the usual Segre immersion of the rank-$r$ secant join. Regarding $\mathbb{P}^{(\Pi_{i=1}^n a_i) -1}$ as an $n$-qudit Hilbert space denoted $\mathcal{H}$ for concision, and furthermore regarding $\mathcal{H}$ as a Kähler manifold, we specify $\omega$ on $\mathcal{L}$ as the symplectic form associated to the Kähler potential $\kappa = \langle\psi|\psi\rangle$, given first as a real-valued (bilinear/biholomorphic) function $\kappa\colon \mathcal{H}\to\mathbb{R}$, and thus specified as $\kappa\colon \mathcal{L}\to\mathbb{R}$ by pullback onto the Segre immersion $\mathcal{L}\subset\mathcal{H}$; similarly let $g=\langle\psi|G|\psi\rangle$ be the real-valued (bilinear/biholomorphic) symbol function that is specified by a general hermitian operator $G$, with $g$ similarly pulled-back to $\mathcal{L}$ from $\mathcal{H}$.

Answers to these questions (or better-constructed questions) were sought:

Q1  Is the Zariski closure of $\mathcal{L}(r,\{a_i\})$ endowed with a differential structure that is globally smooth?

A1  The answer is no (not in general). For example (as explained by Will Sawin) the manifolds $\mathcal{L}(a-1,\{a,a\})$ are determinantal, and thus are known to be generously endowed with singular points.

Q2  In the event that $\mathcal{L}$ is equipped with (one or more) smooth differential structure(s), is it the case that $dg \in \text{span}\ \hat\omega$?  Physically, are hermitian operators on $\mathcal{H}$ generically associated to singularity-free symplectomorphic flows on differentially smooth immersed $\mathcal{L}$-manifolds?

A2  Formally the answer is no, in that $\mathcal{L}$ generically has no smooth differential structure, per answer A1.

Q3  In the event that $\mathcal{L}$ has no defect-free differential structure(s), what smoothness-defects appear in the symplectomorphic flows on $\mathcal{L}$ that are induced by pullback of (bilinear/biholomorphic) Hamiltonian potential functions from $\mathcal{H}$?

A3  Despite the algebraic singularities that are mentioned in A1–2, the answer is conjectured to be "symplectic defects are dynamically occult", in a concrete sense that will be explained in an auxiliary answer (to be posted in the next day or two). In brief, the Hamiltonian structure that is pulled back from $\mathcal{H}$ is conjectured to induce dynamical maps $M(t)\colon \mathcal{L}\to\mathcal{L}$ that are exact symplectic isomormorphisms, despite the singular points of $\mathcal{L}$, and despite the rank-deficit of the pulled-back symplectic form $\omega$ at those singular points. Physically speaking this, means that the varietal singularities of $\mathcal{L}$ do not obstruct computational simulations of thermodynamical physics associated to symplectomorphic dynamical flow.

Engineering motivation  Engineers "know" — from concrete computations — that $\mathcal{L}$ is richly endowed with singularities in Riemannian/Ricci/scalar curvature. And yet experience teaches that these curvature singularities are seldom (never?) associated to computational pathologies in simulating quantum trajectories as integral curves of Hamiltonian flows. Thus the questions asked are motivated by a postulate that the structure of $\mathcal{L}$ is differentially smooth with respect to symplectic forms and Hamiltonian potentials that are pulled-back from $\mathcal{H}$, even though $\mathcal{H}$ induces metric curvature on $\mathcal{L}$ that is singular.

The broad question  In what mathematical sense(s) — if any — does algebraic geometry teach that $\mathcal{L}$'s symplectic geometry is differentially smooth, even though $\mathcal{L}$'s metric geometry is singular? In purely practical terms, why don't our quantum trajectory simulation codes break more often? Advice in framing these questions more clearly and naturally is very welcome.

In physical terms LangreTangles are emergently-quantum trajectories on "foamy" dynamical manifolds; thus natural physics-oriented questions include "What experimental techniques are suited to the observation of LangreTangle trajectories?" 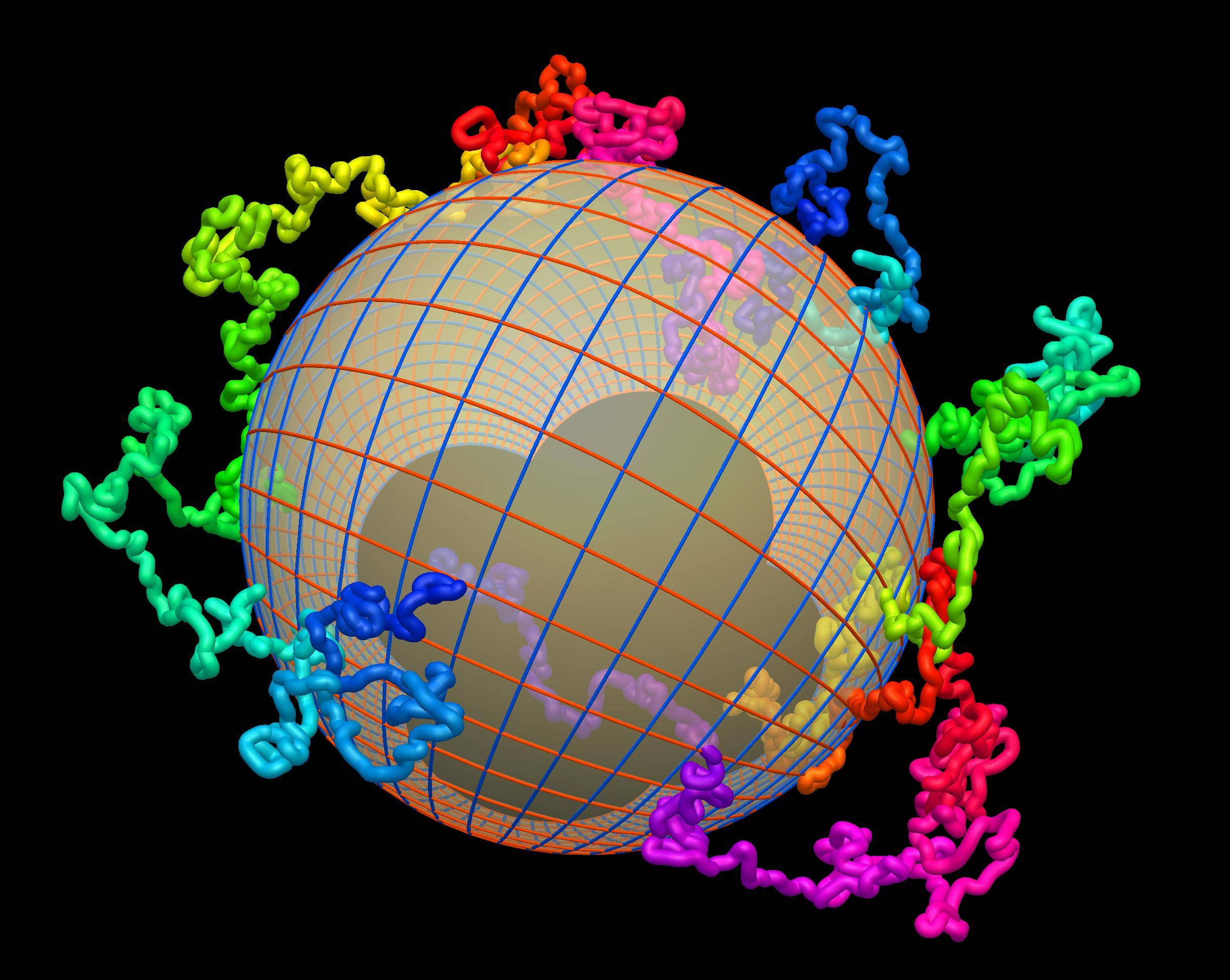 Caption  A numerically-integrated portion of a typical LangreTangle trajectory $L(\psi_0,4,\{3,3,3\})$, drawn as a projective map $S^3\,{\to}\,R^3$. It is conjectured that the full LangreTangle would fill $R^3$ with a closed-loop "tangle". Physically this particular LangreTangle is associated to the rank-$4$ secant join of the product state of three spin-$1$ particles. Further LangreTangles have been computed as follows:

We can't just keep making equivalences between ideas that were essentially handed to us from the early part of the 20th century. We have to find really new things!

As a conjectural candidate for "a really new thing," Arkani-Hamed et al. describe a class of non-Hilbert dynamical systems in which unitarity and locality are encoded emergently, in geometric objects called amplituhedrons — for details see Gil Kalai's MathOverflow question "What is the amplituhedron?" — that have been depicted in the non-specialist literature as "a jewel at the heart of quantum physics"

Engineering considerations  Quantum systems engineers are naturally sympathetic to the notion of dynamical systems in which unitarity and spatial locality are emergent rather than fundamental, in that large-scale quantum systems commonly are simulated by algorithms in which unitarity is only approximate (in that trajectories are integrated on non-Hilbert tensor network manifolds) and spatial locality is emergent (via Lindblad/Carmichael trajectory unravelings that dynamically quench macroscopic Schröedinger cats).

Nomenclature  To concretely visualize these non-Hilbert quantum trajectories, we adopt the notation of Robert Landsberg's text Tensors: Geometry and Applications, in which the geometric objects of primary interest are secant varieties of Segre varieties

Visualizing unit-zabacity geometry  The geometry of $\mathcal{L}(4,\{3,3,3\})$, regarded as a submanifold of complex dimension 25 immersed in a normalized Hilbert space $\mathbb{P}^{3^3-1}$ of dimension $3^3-1=26$, can be concretely visualized by intersecting $\mathcal{L}(4,\{3,3,3\})$ with any convenient three-dimensional submanifold of the immersing $\mathbb{P}^{3^3-1}$ Hilbert space; an obvious and geometrically natural candidate for such a three-dimensional submanifold is the rotation group $\text{SO}(3)\sim S^3$. Then we have:

Numerical and graphical considerations  Closed-form arbitrary-dimension representations of the quantum rotation matrix $R(q)$ (which are due to Wigner) are given in standard textbooks such as Gottfried's Quantum Mechanics (1966); quaternionic coordinates on $S^3$ are well-suited to efficient trajectory integration; graphical representations of the Hopf fibration commonly employ the simple-to-compute projective map $S^3\to R^3$; thus the exhibition of concrete LangreTangle trajectories is computationally straightforward.

LangreTangled trajectories  For generic starting-states $\psi_0$, numerical integration of the LangreTangle trajectories for $L(\psi_0,4,\{3,3,3\})$ shows a striking "tangle", and higher-dimension unit-zabicity manifolds (not shown) are found to support even more tightly tangled trajectories. This tangled geometry motivates both the name of the zabacity dimension-measure (from the Persian zabd meaning "foam-like," and zubdat meaning "cream-like," as skimmed from a body of liquid) and the portmanteau word LangreTangle, which derives from "Robert LANdsberg" and "Corrado SeGRE*" and "quantum enTANGLEment".

Open questions  The questions asked in the beginning then follow naturally from the preceding considerations (along with many more mathematical questions, needless to say). In particular, the strikingly high prevalence of unit-zabicity large-dimension Hilbert spaces apparently is associated to the numeric properties of Cunningham numbers, which cause unit-zabacity Hilbert spaces of large dimension to be exponentially more common than heuristic factor-counting arguments would suggest (in that, for various number-theoretic reasons, the Cunningham integers $a^b\pm 1$ commonly have small factors); the question-asker would be grateful for mathematical illumination in regard to this connexion.

Physics perspectives  From a physics perspective, a natural question is simply: "By what observations, either in principle or in practice, can (flat) Hilbert-space dynamical manifolds be experimentally distinguished from ("foamy") finite-zabacity dynamical manifolds, even for systems as simple (seemingly) as three interacting spin-$1$ particles?" Again, references and/or experimental suggestions are welcome.

Acknowledgements  The continuing stimulus of comments and questions by Gil Kalai]in regard to issues of quantum unitarity, locality, and algebraic geometry is gratefully acknowledged.

$\mathcal L(a-1,\{a,a\})$ is the hypersurface of the determinant $0$ matrices in the rank $a \times a$. I'm afraid that this hypersurface is not a topological manifold, and hence also not a smooth one.

(here depicted with $a=6$) the leading terms come are the terms involving all $a-2$ nonzero entries. Since there is one term for each permutation, there are only two leading terms : the identity permutation and the transposition of the last two entries.

Not the answer you're looking for? Browse other questions tagged quantum-mechanics quantum-field-theory quantum-computation simulation or ask your own question.

73
What is the amplituhedron?
10
Do quantum “Sure-Shor separators” have a natural Veronese/Segre classification? (question inspired by Gil Kalai and Aram Harrow)

10
In the dictionary between Poisson and Quantum, what corresponds to Coisotropic?
2
Continuous Measurement in Quantum Mechanics
3
Are all quantum cellular automata invertible & representable?
10
Do quantum “Sure-Shor separators” have a natural Veronese/Segre classification? (question inspired by Gil Kalai and Aram Harrow)
2
Quantum Field theory - integral notation
21
Quantum fields and infinite tensor products
12
Is a unitary Hamiltonian TQFT the same as a unitary axiomatic TQFT?
7
Why does Riesz's Representation Theorem apply in quantum mechanics?
Question feed