The amplituhedron minus the physics

Is it possible to appreciate the geometric/polytopal properties of the amplituhedron without delving into the physics that gave rise to it? All the descriptions I've so far encountered assume familiarity with quantum field theory, but perhaps there exist more purely geometric explications...? If so, I would appreciate a reference—Thanks! 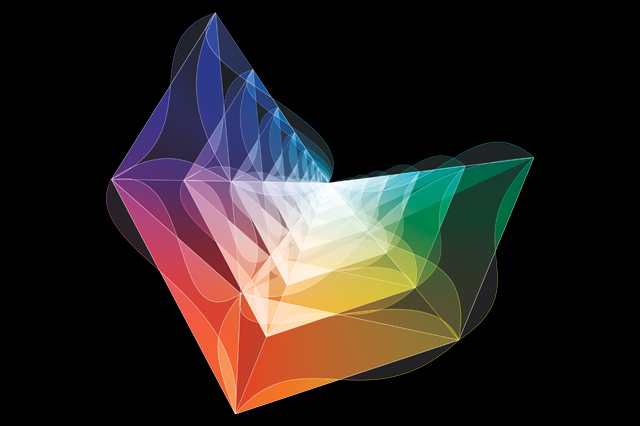 (Added). Here is a snapshot from p.64 of the paper which jc cited, "Scattering Amplitudes and the Positive Grassmannian." (I am guessing that what they called the "positroid" in this paper is either closely related or perhaps identical to what was later named the "amplitudedron"?) 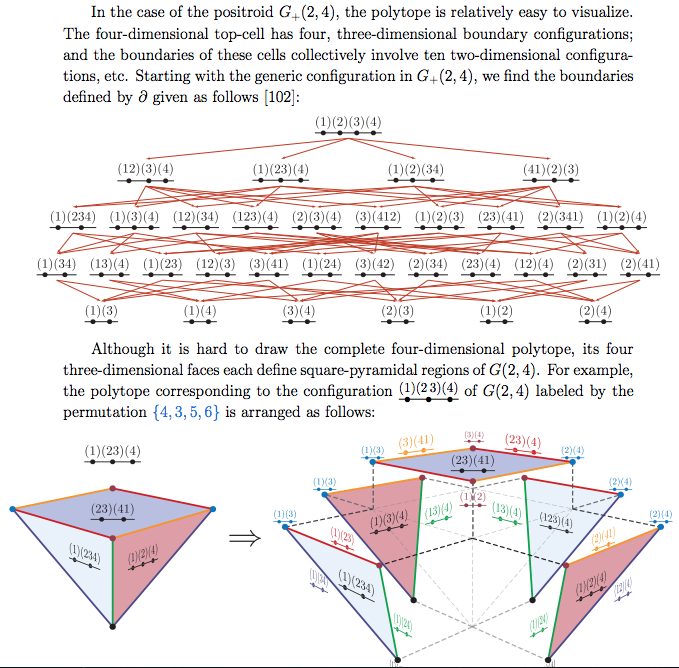 Nima Arkani-Hamed had a series of talks at JHU roughly 6 months ago which I attended related to this topic. He discussed it at Stony Brook a little bit over a week ago (pointed out by Emilio Pisanty in the comments above in which he used the term "amplituhedron", but my understanding of this comes mostly from his earlier talks.

Update: I managed to track Nima down today and get him to explain the details. Surprisingly almost everything was correct, but the loop level description has some changes. I've also made some aesthetic changes, attempting to follow the notation in Trnka's slides as closely as possible while being readable by mathematicians. Also note that Nima claimed that their paper on this would appear "very soon".

Update 2: Their paper has appeared on the arXiv: http://arxiv.org/abs/1312.2007. At first glance everything seems consistent with what I've written below. I think it should be readable to mathematicians simply by skipping the few sections which require knowledge of physics. They do find some combinatorial results therein which may be of interest, but as this answer is already rather large I'll just direct those interested to the paper directly.

Everything here is over $\mathbb R$. We know that the quotient of the subset $\tilde{M}(k,n) \subset M(k,n)$ of matrices with full rank by the $GL(k)$ left action gives the Grassmannian $G(k,n)$, in which each matrix is mapped to its row space. Define $M_+ (k,n)$ to be the subset of $M(k,n)$ in which all $k \times k$ minors are positive (ordering the rows in the process). The image of $M_+(k,n)$ under this quotient is the positive Grassmannian $G_+(k,n)$.

Fix a matrix $Z \in M_+(k+m,n)$ as input data, which comes from physics, but won't really affect the combinatorial structure* at all.

Then there is a map $Y_{n,k,m}: G_+(k,n) \rightarrow G(k,k+m)$ given by $([C],Z) \mapsto [CZ^T]$, where brackets denote equivalence classes under the $GL(k)$ action (the requirement that $CZ^T$ has full rank is automatically satisfied if both are in their respective positive pieces). Its image $\mathcal P_{n,k,m}$ is called the tree-level amplituhedron. The combinatorial structure does depend on $n,k,$ and $m$. This case is apparently fairly well understood thanks to their work with Alexander Postnikov (according to Nima).

(One of the interesting aspects of this positive-real story is that while the map $Y_{n,k,m}$ is only a rational map of algebraic varieties, its base locus doesn't intersect $G_+(k,n)$.)

*I've seen it claimed that $Z$ can be taken to live in $G_+(k+m,n)$. I must admit this doesn't make sense to me because the map described above is not invariant under the right action by $GL(k+m)$. If I'm missing something obvious though than feel free to correct me. At the very least, I'm pretty sure that the above description works, but it might be a bit more redundant than necessary.

The parameters are important for physics, so I'll list them, but of course if you're not interested in the physics you can set them to be whatever you like. $k$ is the order in perturbation theory. $l$, the loop order. $m=4$ is the case for physics, but in principle $m$ can be any even positive integer ($m=2$ makes the loop part trivial, so $m=4$ is in some sense the first interesting case). $n$ is the number of momenta in the scattering process. $Z$ is a positive matrix that represents all of the momenta, but at least for the purpose of combinatorics the structure doesn't really depend on the choice of $Z$. There are of course cases in which the construction does not make sense; these are irrelevant for physics (e.g. $n-k < m$ is unphysical). Also, while I'm talking about physics, to get physical predictions out of the amplituhedron, there is a particular volume form which is simply integrated over the region. This volume gives the amplitude for the process.

Alexander Postnikov gave a detailed series of lectures on the positive Grassmanian at the Hebrew University of Jerusalem (see links below). He also briefly referred to the amplituhedron.

Folowwing Postinkov, I can briefly explain the situation as follows:

A) The stratification of the positive Grassmanian:

Regard the Grassmanian as represented by equivalence classes of $m$ by $n$ matrices ($m \le n$) under row operators.

The positive grassmanian is the set of totally-non negative matrices namely those where all $m$ by $m$ minors are nonnegative. It has an important cell-like structure (the open cells are known to be homeomorphic to open balls, their closures are conjectured to be homehomorphic to closed balls) that can be defined in two equivalent ways as follows:

Given an ordering of the $n$ columns the cell of the Shubert stratification indexed by a subset $S$ (of size $m$) are matrices whose lexicographically first non-zero minor (w.r.t. the ordering) is $S$.The matroidal stratification is the common refinement of these Shubert decomposition with respect to all permutations.

The cell structure studied by Postnikov can be seen

a) as the matroidal stratification reduced to this part of the grassmanian;

b) Start with the common refinement of Shubert cells with respect to a cyclic family of permutations (for the whole Grassmanian this lies between the Shubert stratification and the matroid one). Then restrict it to the positive Grassmanian.

This cell structure has beautiful combinatorial description in terms of certain planar graphs and statistics of permutations.

Recall that every polytope is a projection of a simplex and projections with respect to totally positive matrices give precisely the cyclic polytope.

Update: Some more details and links can be found in the blog post The simplex, the cyclic polytope, the positroidron, the amplituhedron and beyond.

Not the answer you're looking for? Browse other questions tagged convex-polytopes quantum-field-theory grassmannians total-positivity or ask your own question.

73
What is the amplituhedron?
3
Positroids and Totally Nonnegative Complex Grassmanian
2
The Stock Market Polytope: Explanation?

24
What are Gromov-Witten invariants in terms of physics?
16
Donaldson-Thomas Invariants in Physics
5
Advice on doing physics under the umbrella of mathematics and the converse
50
The Unreasonable Effectiveness of Physics in Mathematics. Why ? What/how to catch?
8
What is the “Tangle” at the Heart of Quantum Simulation?
73
What is the amplituhedron?
17
Anomaly in QFT physics v.s. determinant line bundle
Question feed