Is there a nice way to “unravel” a great dodecahedron?

The great dodecahedron is a non-convex regular polyhedron bounded by 12 pentagonal faces, crossing each other, arranged in a star-shaped manner around each of its 12 vertices (see the Wikipedia page for a picture.) From a topological point of view, the abstract surface that you get if you glue the faces along the corresponding sides is a compact orientable surface; hence it is homeomorphic to a sphere with some number of handles. It is easy to check that it has genus 4. (You can also see it as a 3-sheeted Riemann surface with 12 branch-points.)

Thus it is possible to draw, on the surface of a 4-holed torus, a graph consisting of 12 vertices and 30 edges that subdivides the surface into 12 pentagonal regions, with 5 such regions meeting at each vertex. To put it more concisely: there exists a sort of 4-holed polyhedron which is regular in at least a topological (or, if you prefer, combinatorial) sense and whose Schläfli symbol would be {5 5}.

I was actually able to draw such a picture, but all I see is a tangle of lines twisting and wrapping around in all directions. My picture has no obvious symmetry. Is it possible to embed this object in ordinary 3-space without self-intersections, but with, let's say, at least an axis of 5-fold rotation? (Unfortunately, I suspect the answer is "no".) Or is it possible to at least make sure that there is a group of easily described transformations that coincides, at least partially, with the abstract symmetry group of the configuration (which has order 120)?

I think it is, however, possible to embed the genus 4 surface in the lens space $L(5,2)$ with 5-fold symmetry.

[Added later] Here's how to embed the surface in $L(5,2)$ with 5-fold symmetry. (I apologize for the lack of pictures.) $L(5,2)$ is the union of two solid tori. Let $X$ and $X'$ be two meridian disks of the first solid torus, and let $Y$ and $Y'$ be two meridian disks of the second solid torus. The boundaries of $X,X',Y,Y'$ divide the torus $T^2$ into 20 parallelograms. Color these parallelograms black and white in an alternating, checkerboard fashion. Now consider $$X \cup X' \cup Y \cup Y' \cup \mbox{the 10 black parallelograms} .$$ This is a (piecewise linear) surface of genus 4 (which of course can be smoothed if one so desires). The surface has an obvious 5-fold symmetry, and this symmetry has four fixed points (the centers of $X,X',Y,Y'$) with rotation angles as described above.

All that remains is to divide this surface into 12 pentagons. The first two pentagons are easy: they are $X$ and $X'$. Now for the remaining ten pentagons. $Y$ and $X'$ intersect in five points on the boundary of $Y$. Draw lines from these five points to the center of $Y$. This divides $Y$ into five pieces $Y_0, Y_1, Y_2, Y_3, Y_4$. Similarly divide $Y'$ into five pieces $Y'_0,\ldots,Y'_4$ using intersections with $X$. Each of the ten (black) parallelograms intersects each of $X,X',Y,Y'$ on one side of the parallelogram. Cut each parallelogram into two triangles so that one triangle contains the $X$ and $Y$ sides of the parallelogram and the other triangle contains the $X'$ and $Y'$ sides of the parallelogram. Each $Y_i$ is adjacent to two of these triangles; add those two triangles to $Y_i$. Similarly add two triangles to each $Y'_i$. We have now divided the surface into 12 pieces, and one can check that combinatorially each piece is a pentagon, and furthermore that the combinatorics match the great dodecahedron.

There is a drawing of it, relatively free from tangles, at http://www.weddslist.com/rmdb/map.php?a=R4.6. I don't know if this is anything like what you are looking for. 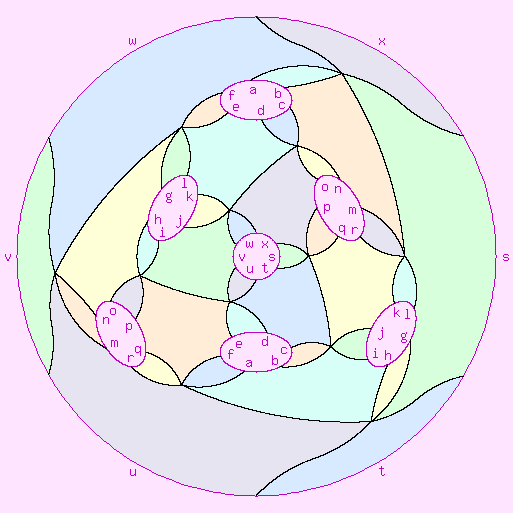 I don't see this specific example in it, but for work on embedding high-genus regular maps such as this one onto (non-self-intersecting) surfaces in 3d in a way that shows off some of their symmetries, see Jarke J. van Wijk, Symmetric Tiling of Closed Surfaces: Visualization of Regular Maps. ACM Transactions on Graphics vol. 28, no. 3, Article 49, 12 pages, August 2009. Proceedings ACM SIGGRAPH'09. http://www.win.tue.nl/~vanwijk/regularmaps_siggraph09.pdf

Not the answer you're looking for? Browse other questions tagged graph-theory combinatorial-geometry or ask your own question.

2
When can a folded polygon be isometrically (locally) embedded into R^3 ?
3
Spanning trees in 3 regular graphs.
8
Highly symmetric 6-regular graph with 20 vertices
4
An eigenvalue upper bound for 1-walk-regular graphs
4
Structures for random graphs with structure
33
An intelligent ant living on a torus or sphere – Does it have a universal way to find out?
Question feed