Can a tangle of arcs interlock in plane?

This is a variation of the question Can a tangle of arcs interlock?, asked by Joseph O'Rourke, and solved. I reproduce the question here:

Can a (finite) collection of disjoint circle arcs in $\mathbb{R}^3$ be interlocked in the sense in that they cannot be separated, i.e. each moved arbitrarily far from one another while remaining disjoint (or at least never crossing) throughout? (Imagine the arcs are made of rigid steel; but infinitely thin.) The arcs may have different radii; each spans strictly less than $2 \pi$ in angle, so each has a positive "gap" through which arcs may pass.

My proposed variation is:

I posted a comment at the original question, claiming that three circle arcs can be locked.

I soon realized that the examples with three arcs can in fact be unlocked, and I think Joseph O'Rourke did the same. I reproduce here my solution to unlock them:

So, the question is still open for two dimensions. 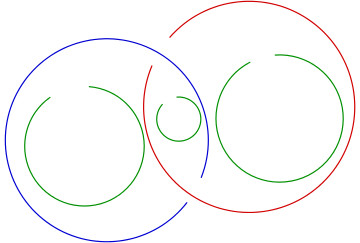 I don't see that anything significant can be done here except idly rotating the green circles in place.