a question for the prime counting function

A famous inequality that has been proved by J.B. Rosser and L. Schoenfeld says that

This is an exact formula for $\pi(n)$ that occurs infinitely often.

The question is: Do we have any knowledge about when $\pi(n)$ divides $n$ or anything in this direction?

Thank you for viewing.

Recipe for finding this: Write a line of Mathematica code to find all such $N$ under $200$. Plug the sequence into Sloane's encylcopedia to find A057809. Stumble around the "related sequence" links until I find A038626, which cites Golomb. 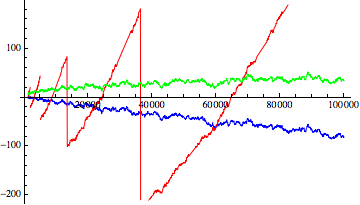 You can see that green is a little bit better than blue and both are in general far better than red, although red is occasionally exactly right.

I think Riemann Hypothesis is related to the size of the fractional part of your formula.