Can a tangle of arcs of ellipses interlock

This is a variation on an earlier question resolved by user35353: Can a tangle of arcs interlock? In that question, the arcs were restricted to circular arcs, and user35353's proof that one arc can be removed without disturbing the others relies on the circularity of the arcs. That proof fails with elliptical arcs. The length of the major and minor axes are arbitrary, and, just as in the previous question, the arcs must leave a positive gap, i.e., they cannot be complete ellipses.

Because $a\lt B$, there is a minimal distance $d$, so that, if we introduce the large ellipse through a small one, the distance between their centers cannot be smaller than $d$.

Because $a\gt b$, there is a maximal distance $D$, so that, if we introduce the large ellipse through a small one, and the distance between their centers is smaller than $D$, the small ellipse can't be rotated around the large one.

To find a configuration as in the figure which is locked, we look to satisfy the following conditions.

To find the values satisfying these conditions, start from a configuration with $b\lt a\lt B\lt A$. Then, if the condition is not satisfied, replace $a\mapsto (a+B)/2$. Then, $d$ decreases, but $D$ remains unchanged, since it depends only on $b$. If we repeat this, $d\to 0$, so at some point $d\lt D$ and $d\lt b$. Then, $b$ can be replaced by a smaller value, which is larger than $d$, but smaller than $D$.

This is not an answer, but I cannot write short comments.

Here I'll try to describe a counterexample, i.e. a construction of elliptical arcs that cannot be separated mechanically from each other. Take 12 equal ellipses with eccentricity close to 1, so the ellipses may be considered "close" to a segment. Now arrange them in a cubical construction, each ellipse corresponding to an edge of the cube in a way that any two ellipses meeting in a "vertex" are linked. Make small gaps in each ellipse near its "middle" (in a point of minimal curvature). I have the feeling that this construction is "solid" and the arcs cannot be separated - if we try to make profit of the gaps we should destroy the "vertices", but then the ellipses will touch very soon... Of course, this is not a proof, maybe it is easier to make a corresponding model and to try to disassemble the construction.

On the other hand, one may replace the cubical model by an arbitrary solid model (with elliptical edges) and it is hard to believe that any such construction is demountable.

Here is a construction of five interlocking elliptical arcs. 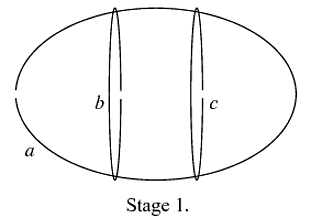 In Stage 2, the first two braces are braced quite tightly by secondary braces $d$ and $e$, very close to the arc $a$ and much narrower than the first ones. Now the configuration is locked. 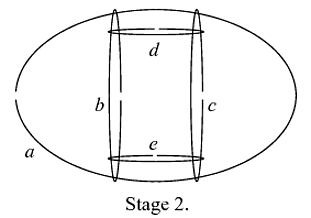 The Borromean rings have an elliptical form in $\mathbb R^3$ given by the union of the three:

I think if you cut out small chunks from these ellipses appropriately, they will still be locked. If I find a proof I'll edit this later.

edit: this is not an answer.

I think that this configuration cannot be untangled.

Here's another example of four interlocking ellipses: The large ones are in planes parallel to the screen; the small ones lie in planes perpendicular to it, and they are very narrow. 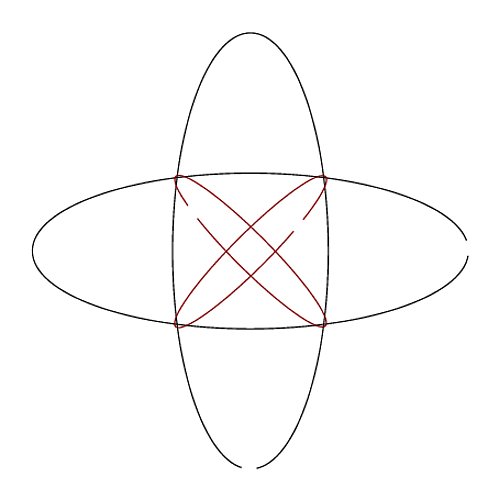