On the canonical neighborhoods

Suppose $M$ is a 3-dimensional manifold, John W. Morgan and Frederick Tsz-Ho Fong in their "Ricci Flow and Geometrization of 3-Manifolds" book as a definition of canonical neighborhoods have written:

We fix an $\epsilon >0$, there are essentially $3$ types of $\epsilon$-canonical neighborhoods: 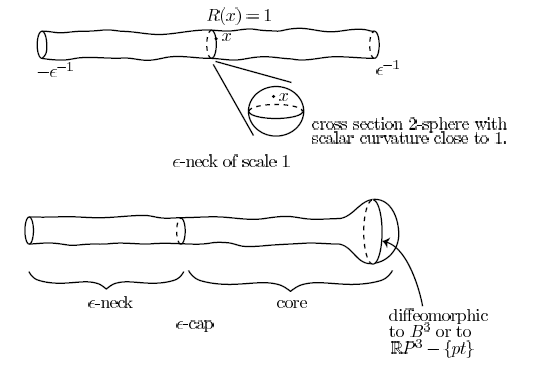 Answer to question (1): the notation means that if you let $k$ be the greatest integer not larger than $\varepsilon^{-1}$, you want the covariant derivatives of the rescaled pullback metric of order up to and including $k$ to be all of size smaller than $\varepsilon$ in the product metric.

Answer to question (4): a component of positive sectional curvature looks like a sphere, or a finite quotient of a sphere (a lens space or 3-dimensional real projective space).

Not the answer you're looking for? Browse other questions tagged dg.differential-geometry riemannian-geometry manifolds ricci-flow or ask your own question.

19
Point singularity of a Riemannian manifold with bounded curvature
9
On Alexandrov embedding theorem
1
What is the correct notion of boundary of a submanifold?
38
Many flat totally geodesic surfaces ⇒ flat?
5
Stability of Pu's isosystolic inequality
6
Local differential geometry and invariant theory
11
Curvature of maximum of two riemannian metrics
5
A question on Cheeger-Gromov compactness theorem
Question feed