Seeing Garabed Gulbenkian's question (which was inspired by Joel Hamkins' question), reminds me of an analogous problem which I believe remains open, and which some might find intriguing. Define an equiprojective polyhedron $P \subset \mathbb{}R^3$ as one whose orthogonal projections—with the exception of projections in directions parallel to a face—are all $n$-gons for the same $n$. The definition is due to Shephard, 45 years ago. Thus, cubes are 6-equiprojective: their only projections to quadrilaterals are along directions parallel to faces. A triangular prism is 5-equiprojective. There are no 3- or 4-equiprojective polyhedra, as established in the paper that recently reopened this dormant subject: 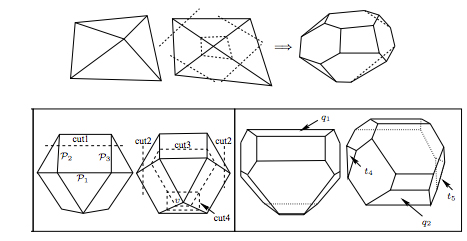 I believe this remains open:

Addendum. After seeing Ian's nice resolution of Q1, I went back to the cited paper and found this was already known: "(in fact, any $p$-gonal prism is $p + 2$-equiprojective)." My apologies! So I guess the real open problem here is:

A $k$-drum (a product of a convex polygon and an interval, generalizing the prism and cube) is $k+2$-equiprojective for every $k$. The point is that one will see $m$ edges of the front face on the outer boundary, and $k-m$ edges of the lower face on the outer boundary for some $m$, and $2$ edges of two rectangular sides from any direction. Consider the projection of a polygon $\times \mathbb{R}$. This will project to an interval $\times \mathbb{R}$, where the endpoints of the interval are two extremal points of the polygon projection, cutting the polygon into $m$ and $k-m$ edges for some $m$. Now, cut this product at two levels to get a drum. The projection of the drum will be the convex hull of the projection of two faces, which will be two copies of the projection of the polygon, translated inside of the strip. So one sees $m$ edges from one face of the drum, $k-m$ from the other face, and $2$ edges from the projection of two edges corresponding to the extremal points $\times$ interval. 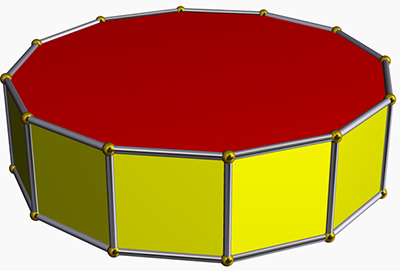 Not the answer you're looking for? Browse other questions tagged mg.metric-geometry open-problems convex-polytopes polyhedra or ask your own question.

81
Is the sphere the only surface all of whose projections are circles? Or: Can we deduce a spherical Earth by observing that its shadows on the Moon are always circular?
6
A question about a question about 3-dimensional convex bodies