A natural definition (suggested in an earlier MSE question) is $d(L_1,L_2) = s + |\theta|$. But this is not a metric. For example, a sufficiently large value of $a$ below ensures the triangle inequality will be violated: 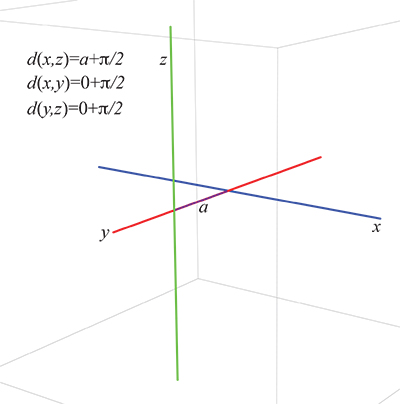 I would be interested to learn of metrics defined on lines in space, and whether or not any such metric satisfies the properties above. Perhaps the properties cannot be achieved by any metric?

Update. Here is my current understanding of the rich variety of the erudite answers provided. Apologies in advance if my summary is inaccurate.

First, there is no such metric, interpreting my second condition as (naturally) demanding invariance under Euclidean motions, as convincingly demonstrated by Robert Bryant, Vidit Nanda, and Pierre Simon. Second, a looser interpretation requires only that if we fix $L_1$, then $d(L_1,L_2)$ is monotonic with respect to $\theta$ as $L_2$ is spun "about their intersection point in the plane that contains them [Yoav Kallus]." Then, Will Sawin's metric satisfies this condition. Here is an example of why this metric fails the more stringent condition—it depends on the relationship between the lines and the origin:

The right lines could be further apart than the left lines (depending on $a$ and $b$).

There is no hope of making any such metric continuous with respect to $\theta$ at $s=0$ without violating the triangle inequality even in the plane. Consider parallel lines $L_1$ and $L_2$ which are some huge distance $s$ apart and a third line $L_3$ which intersects both at a very tiny angle $\theta$. Here's a picture:

Unfortunately, my original answer below was completely misguided (i.e., wrong), and the people who up-voted it should feel free to reverse their votes! I'm leaving the answer below so that people can see what it was, but I'm prefacing it with a correction. I'm not deleting it because then maybe people won't be able to see it and know that my answer was wrong.

In fact, there is no metric on the space $\Lambda$ of of lines (or oriented lines) in $\mathbb{R}^3$ that is invariant under the group $G$ of Euclidean motions and that induces the standard toplogy on $\Lambda$!

The mistake I made that led to the incorrect answer below what that I forgot that the subgroup $H$ of $G$ that stabilizes a given line is not compact, and so that there does not have to exist a $G$-invariant metric on $\Lambda=G/H$. And, indeed, as the argument above shows, there is no such metric. There is a $G$-invariant measure, but that's a much weaker statement.

I'm very sorry for the error and would be happy to give up all of the reputation points that people have awarded to me for it. I don't know how to do that, though, without deleting the answer, and I think that it might be useful to some people to see that the naïve expecation that there should be such a metric is not actually borne out.

The standard way of doing this is to regard the space $\Lambda$ of lines in (or oriented lines) $\mathbb{R}^3$ as a homogeneous space of the group $G$ of Euclidean motions. Then there is a natural $G$-invariant Riemannian metric on $\Lambda$, and you take the metric from that. I could calculate that explicitly if you are having trouble with it.

Another method is to note that the space of oriented lines is naturally equivalent to the tangent bundle of $S^2$, namely, given a line $l$, you let $u(l)\in S^2$ be the oriented direction of the line, and you let $v(l)\in u(l)^\perp$ be the point on $l$ that is closest to the origin. Then the mapping $l\to \bigl(u(l),v(l)\bigr)$ embeds the space of oriented lines in the space $S^2\times\mathbb{R}^3$ and you can take the induced metric, for example.

This is probably obvious for everybody who contributed here, but I thought it bares saying explicitly. If you forego invariance with respect to isometries of $\mathbf{R}^3$, you can still have a metric that respects isometries that preserve the origin. For example, if you think of lines in $\mathbf{R}^3$ as a subset of lines in $\mathbf{RP}^3$, you can take the metric induced by some metric on the Grassmannian $G(4,2)$ of 2-planes through the origin in $\mathbf{R}^4$ (each 2-plane corresponds to the line where it intersects $\lbrace(x,y,z,1)\rbrace$). Sure, this metric will not satisfy any of your conditions, but there is an argument to be made that this is the most natural metric you can put on lines in $\mathbf{R}^3$, especially considering the arguments in the other answers here.

This is a metric because it is a sum of two pseudometrics and the distance between distinct lines is $0$. We easily verify that the two bullet points are satisfied, because parallel lines have their closest point to $0$ in the plane which is perpendicular to the lines and passes through $0$.

It dodges Vidit's proof because it is not, as Robert notes, invariant under the group of Euclidean motions.

Not the answer you're looking for? Browse other questions tagged mg.metric-geometry euclidean-geometry metric-spaces or ask your own question.

7
Filling $\mathbb{R}^3$ with skew lines
5
Finding an invisible circle by drawing another line
20
Is every elementary absolute geometry Euclidean or hyperbolic?
10
ten concurrent lines
4
Terminology for metrics?
5
Possible generalization to Kirszbraun's theorem for $\mathbb{R}^2$
30
How should you explain parallel transport to undergraduates?
Question feed