Let $S$ be a set of points in $\mathbb{R}^d$; I am especially interested in $d=2$. Say that $S$ is an integer-distance set if every pair of points in $S$ is separated by an integer Euclidean distance.

What are examples of maximal integer distance sets? (Maximal: no point can be added while retaining the integer-distance property between all pairs.) 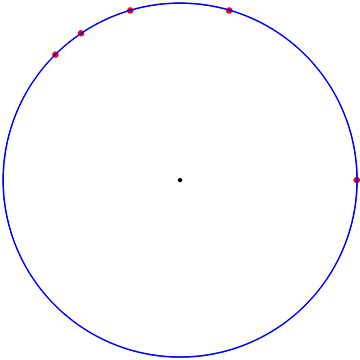 I'm sure this is all known... Thanks for enlightening me!

(This is tangentially related to my earlier question, "Rational points on a sphere in $\mathbb{R}^d$.")

Update1. It turns out that determining the integer-distance sets is fundamentally open. What is known is nicely summarized by Robert Israel and "Daniel m3." In particular, via the Kreisel & Kurz paper, it is unknown (or was unknown in 2008) whether or not there exists an 8-point integer-distance set in $\mathbb{R}^2$, with no three of the points collinear and no four cocircular.

Update3 (21 Jul 2013). I ran across this just-published paper, which explores the in-some-sense obverse of the question I asked: What are the largest point sets in $\mathbb{R}^d$ that avoid points an integral distance apart.

If $S$ is an rational-distance set, then it is not dense in the plane.

And that article cites the Kurz-Mishkin paper above.

See e.g. http://www.ics.uci.edu/~eppstein/junkyard/integer-distances.html for a proof (originally due to Erdos) that there is no infinite non-collinear integer-distance set in the plane.

I think "rational distances from the 4 vertices of a unit square" is problem D19.

Not the answer you're looking for? Browse other questions tagged reference-request mg.metric-geometry open-problems rational-points or ask your own question.

19
Rational points on a sphere in $\mathbb{R}^d$
29
Patterns among integer-distance points
5
Maximum number of general-position points with mutual rational distances?
3
Points with pairwise integer distances in the plane
1
About a problem of fitting a cube in a subset of a sphere

13
Spectral properties of finite metric sets
5
Standard reference for equivalence of PU(2) action on $\mathbb{C}\mathbb{P}^1$ and SO(3) action on $S^2$
5
Least cardinality of a set of points in the plane
29
Patterns among integer-distance points
6
Integral straight-line embeddings of planar graphs
5
Maximum number of general-position points with mutual rational distances?
12
Does every CAT(0) space embed in a measurable integral of $\mathbb{R}$-trees?
5
Transcendental distance sets
3
Has anyone studied spaces based on the number of centers circles have on them?
Question feed