I created a random isometry $T$ of $\mathbb{R}^3$ by generating a random orthogonal matrix $M$, uniformly distributed among all such, and a random displacement $v$, whose coordinates are drawn from a zero-mean normal distribution. For a point $p \in \mathbb{R}^3$, $T(p) = M . p + v$.

Above, the red segments connect $p_i$ to $p_{i+1}$. Essentially these look like two spirals of points forming an unbounded V.

However, (very) roughly 40% of the time, instead spirograph-like bounded rings are formed (or at least: apparently bounded, apparently rings): 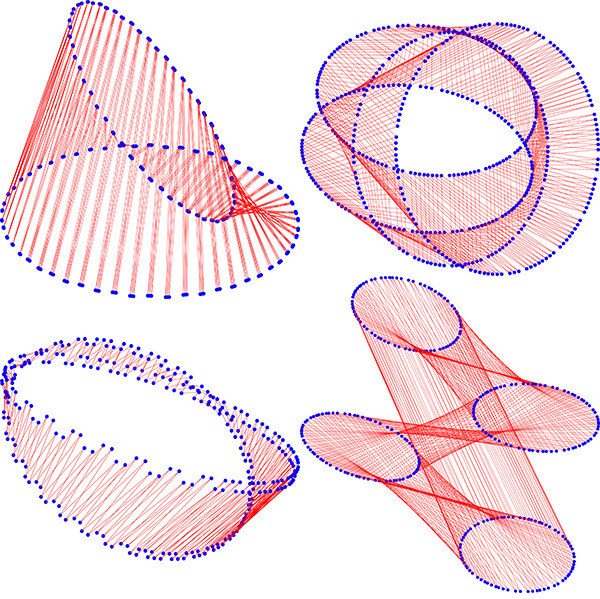 So far inspecting the transformations numerically has not led me to an understanding of this phenomenon. If anyone sees intuitively why this process might lead to essentially two qualitatively different shapes, I'd appreciate an explanation. A specific question is:

Is there a positive probability that $|p_i|$ remains bounded as $i \to \infty$?

I thought the answer should be No but my simulations indicate Yes.

Answered. Both Benoît Kloeckner and Ofer Zeitouni answered the question, using rather different language but ultimately equivalently. One way to summarize the computational consequence their analyses is this: If $\det(M_1 \cdot M_2)=1$, the sequences is unbounded; if instead this determinant is $-1$, the sequence is bounded. As Benoît says, the analysis holds for any number of transformations ($k$-steps rather than two-steps), in which case the $\pm 1$ determinant of the product of the $k$ matrices signifies bounded/unbounded. Here is an example of a bounded 4-step sequence. 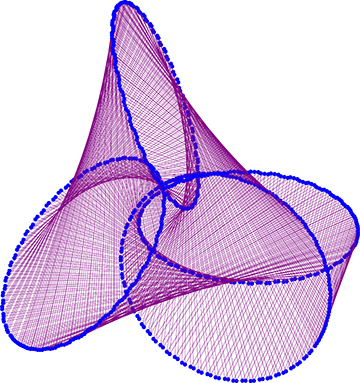 Now I can generate an infinite variety of these elegant figures! Thanks for everyone's help!
pr.probability mg.metric-geometry random-matrices isometries
Share
Improve this question
edited Apr 19 '15 at 16:31
Joseph O'Rourke
asked Jul 12 '13 at 19:14

I have not written down a formal proof but it seems to me that the terms due to $\sum r_1^k$ (and the conjugate of that) are essentially harmless - even if they run off to infinity, they do it VERY slowly (if the angles corresponding to the $r_1$ are rational, you would get a bounded sum; in reality you are rational with probability $0$, but on a computer....).

Note added: Of course, $\sum_{k=0}^i r_1^k$ remains bounded as long as $|1-r_1|$ is bounded below, which occurs with probability $1$. I should have noted that instead of the nonsense I wrote above concerning not writing a formal proof....

The fact that there are two isometries is not relevant to the boundedness of the dynamic: let us look at $U=T_2\circ T_1$. This is a random isometry, whose law may be involved but is certainly absolutely continuous. Writting $U\cdot p = A\cdot p + w$, it has a fixed point if and only if $w$ is in the image of $A-I$. There are two cases.

Second, $A$ is an indirect isometry (an anti-rotation with full (conditional) probability). Then $A-I$ is invertible and $U$ has a fixed point, so that all its orbits are bounded.

Probably more interesting things happen if you choose randomly at each step whether to apply $T_1$ or $T_2$; such random dynamical systems have already been studied in different contexts.

Not the answer you're looking for? Browse other questions tagged pr.probability mg.metric-geometry random-matrices isometries or ask your own question.