Surface in 3D that realizes all pairs of principal curvatures

This is a question that Willie Wong raised in comments after he answered my question, Surface analog of clothoid: curvatures covering $\mathbb{R}^3$. Willie's question is more interesting (and challenging) than mine, essentially requiring the curvatures to map onto $\mathbb{R}^2$ rather than only onto $\mathbb{R}$:

He also suggested that it might be natural to restrict to $\kappa_1 \ge \kappa_2$. 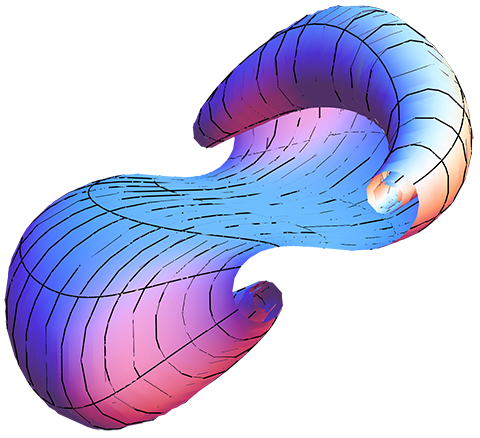 Hopefully I've computed this correctly. I've let the parameters $u$ and $v$ range over $\pm 4$.

I had yesterday supplied an idea for the construction of such surface as an answer to Surface analog of clothoid: curvatures covering $\mathbb{R}$, however I doubt, whether my construction really generates all pairs of principal curvatures especially the pairs $(\pm\infty,\pm\infty)$, resp. $(\pm\infty,\mp\infty)$, so here is an improvement:

the formula without the $\frac{1}{g(u)}$ term resembles my original suggestion of generating $S(u,v)$ by combining two clothoids who's containing planes are mutually perpendicular; the first clothoid (parameterized by $u$), which acts as the master clothoid, is the standard clothoid in the $xy$-plane; the second clothoid (parameterized by $v$) is defined in a local coordinate system with its origin somewhere on the master clothoid, the positive $z$-axis yields the local "$x$-axis" and the curve-normal in that point yields the local "$y$-axis"

It remains to check, whether the suggested surface also has points with a pair of arbitrarily small principal curvatures, i.e. pairs of curvatures that are arbitrarily close to $(-\infty,-\infty)$

1
Surface analog of clothoid: curvatures covering $\mathbb{R}$
3
Existence and Properties of 3D Curves with unusual 2D $(\kappa(s),\tau(s))$ Trajectories
5
Can the conformal structure on the projective light-cone detect hyperplane sections?
16
Are there some intrinsic invariants of surfaces other than Gaussian curvature?
4
Riccati equation and principal curvatures
2
Some curves on the Jacobian of a genus $2$ curve and their image under certain maps (char $p$)
1
In search of a new isometric twisting invariant $ T= \tau_1.\tau_2 $
6
Is Gauss map of a free boundary convex disk a diffeomorphism?
Question feed