A convex curve inside the unit circle

Has this theorem a specific name; and I need some references for general form.

The drawing below illustrates a proof for the theorem as stated in your question; almost no words of explanation are necessary. To make things easy, I write a few lines. The whole proof is based on the fact that the shortest path connecting a pair of parallel lines is the (straight) line segment perpendicular to them. 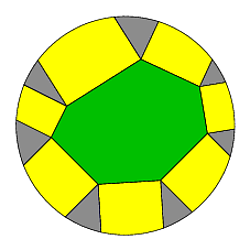 The same proof works for a more general convex shape instead of the circle, and a non-convex shape can be replaced with its convex hull, whereby perimeter decreases. If the polygon inside is replaced with an arbitrary convex shape (not necessarily polygonal), use an arbitrarily close approximation from inside by a convex polygon.

The same idea works in every dimension $n\ge3$ as well, the perimeter being replaced with the $(n-1)$-dimensional (hyper)surface area. However, the case of the outside shape being non-convex requires a more essential modification, since passing to the convex hull may increase the surface area.

This seems obvious if you make the circle out of a rubber band, and let it relax. I think one could make this model mathematically rigorous: take a supporting line to the inner convex body, and use it to cut a chord off of the circle (or any convex body containing it), which is length decreasing. Iterate this operation, getting shorter and shorter outer convex curves, which should limit to the inner convex curve as one varies the support lines densely around the inner curve.

This is "Archimedes' axiom" (Archimedes could not prove it, so introduced it as an axiom while computing the length of the circle). As pointed out by @Yoav Kallus, Crofton's formula is a good way to prove it, but there are plenty of other ways.

This has nothing to do with circles (or polygons). If one convex curve is inside another, then the length of the inner curve is smaller.

This is a consequence of the following facts about the projection $\pi$ on the convex set $C$:

Not the answer you're looking for? Browse other questions tagged gt.geometric-topology convex-geometry or ask your own question.

25
Ellipse naturally associated with a polygon
1
crookedness of convex curves (milnor)
3
Realisation of convex polygons with an interior point from combinatorial data
7
Shortest curve with given convex hull
15
Covering the space by disjoint unit circles
6
Average Volume of Convex Hull of N points in Unit Hypercube
11
What is the area of the biggest open convex set inside the unit square not containing k points?
4
Convex caps with prescribed edges and curvature
Question feed