I have recently discovered a survey article called "The Hahn-Banach Theorem: The Life and Times" by Narici and Beckenstein and I have read it with great amusement:

I was particularly fascinated by Nachbin's theorem on extendibility, which I was not aware of. To put it shortly: Given two normed spaces $X,Y$ and a subspace $U$ of $X$, it is true that any bounded linear operator from $U$ to $Y$ can be extended to a bounded linear operator from $X$ to $Y$ with same norm if and only if $Y$ has the binary intersection property (BIP), i.e., if and only if every collection of pairwise intersecting closed balls has nonempty intersection.

Thus, I started checking for some reference and eventually found another article by Narici, where he indeed quickly proves that $R^2$ with the 1-norm does have the binary intersection property (p. 13, third-to-last remark) and justify the fact that all $R^2$ with the $p$-norm in the reflexive range do not by the smoothness (in the sense of Fréchet differentiability) of their balls; and refer to Goodner's paper from 1950 for the proof of the fact that $R^n$, endowed with the $p$-norm, does not have the binary intersection property for $n>1$ and $1<p<\infty$.

So, the only open question is whether $R^n$ with the 1-norm has the binary intersection property. My geometrical intuition suggests me that this should be true, but Corollary 4.10 in Goodner's paper seems to state that this is not the case for any $n>2$. It surprises me that a counterexample is not immediately found, and I cannot quite follow Goodner's proof.

Does anybody know of a more direct proof and/or a simple pictorial counterexample?

Since the Hahn-Banach extension property passes to contractively complemented subspaces, it suffices to consider the case $\mathbb{R}^3$ with the $1$-norm, where the unit ball is an octahedron.

One can show that three octahedra that meet pairwise must have non-empty intersection, so the simplest possible counterexample needs four octahedra. This is a consequence of the main result of Hanner's Intersections of translates of convex bodies, Math. Scand. 4 (1956), 67-89. Incidentally, Hanner's main result implies that the binary intersection characterizes the $\infty$-norm among all norms in finite dimensions $n \geq 3$.

The idea of the construction of a counterexample to the binary intersection property is very simple: take two octahedra and glue them along parts of opposite edges. Take the other two octahedra and glue them along another pair of opposite edges. Arrange the two glued edges (the dashed segments in the picture below) in such a way that they don't meet, but close enough to each other that the four octahedra have pairwise non-empty intersection: 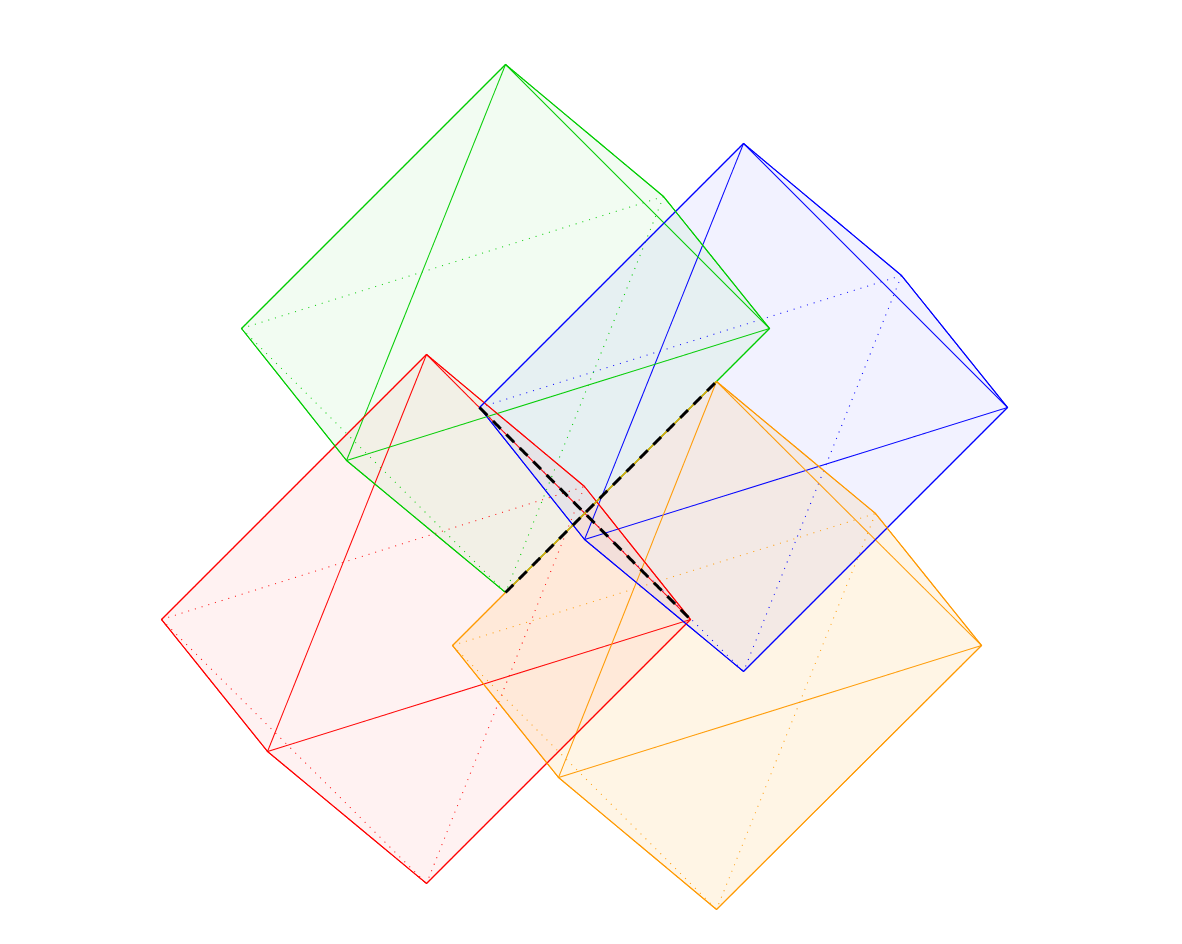 Not the answer you're looking for? Browse other questions tagged banach-spaces hahn-banach-theorem or ask your own question.

64
Results true in a dimension and false for higher dimensions

6
Is a subspace with a certain property dense in the dual of a vector space?
4
radon-nikodým property of $\ell^\infty$
3
Productivity of Corson's property (C)
0
Monotone convergence theorem for operators in the weak operator topology
3
Separation of Infinite-Dimensional Salient Convex Cones
5
Hahn-Banach smoothness of $Y^{**}$ in $X^{**}$
Question feed