How this expression leads to the given sequence

Here given is a sequence from OEIS.

The tabular view shows the entries row wise. $\mathrm{Stirling}_2(n,k)$ is most probably stirling numbers of the second type

I am not able to get how above expression is resulting in the given sequence.
In summation, $k$ begins from 0, but nothing is mentioned about $A(0;x)$. I assumed it to be 0, but still can't get the above values.

Please explain how the first few terms are resulting from the expression.

Stirling numbers of the second kind $S_2(n,k)$ vanish for $k=0$, so the $k=0$ term in the sum does not contribute. You ask for a manual computation of the first few terms. Here we go:

[update] Here -for possibly a nicer reference- I give a screenshot, where the identity by the OEIS-formulae (and kindly expanded by @Carlo Beenakker) is interpreted as matrix-multiplication. It indicates also, that the given formula of relations between the Stirling and A-numbers is near to an eigenvector/eigenmatrix-relation (in fact is a Jordan-decomposition) which I described in my first version of this post (which I kept below).

Here is the matrix-multiplication scheme: 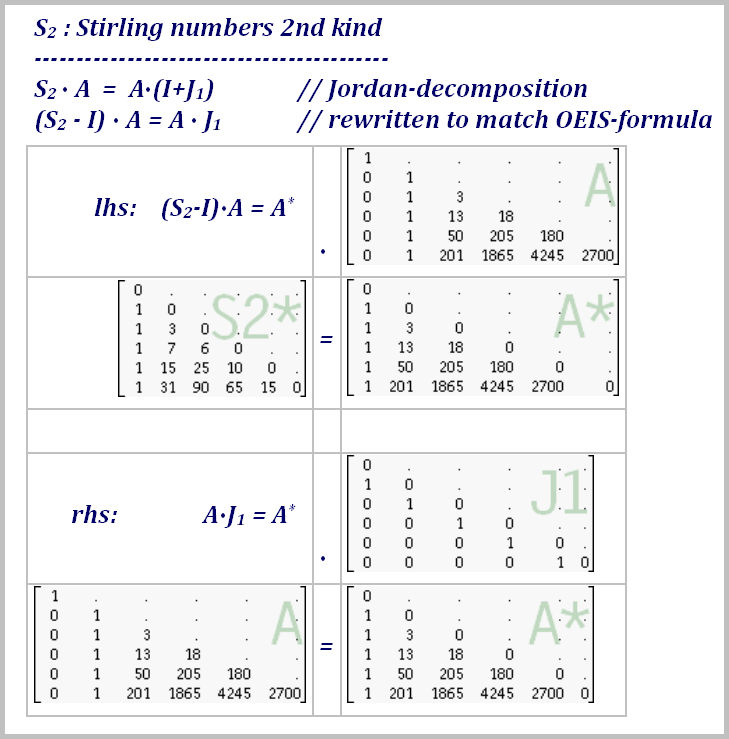 [the original answer: Jordan-decomposition]
Another approach gave the numbers in a completely surprising context; I've no explanation so far. ([update]:It is clear now. Carlo's expansion gave the key hint!).

For the function $\exp(x)-1$ the matrix $S_2$ of Stirling numbers 2'nd kind is involved. I've just recently begun to exercise with the Jordan-decomposition, and for some exercise I took this matrix

This gave the three matrices:

Not the answer you're looking for? Browse other questions tagged stirling-numbers sequences-and-series fractional-iteration or ask your own question.

48
Is there an "elegant" non-recursive formula for these coefficients? Also, how can one get proofs of these patterns?
6
Is there a combinatorial interpretation of this triangle sequence? Is there a "simpler" formula?
1
The closed-form expression for $C_n$ sequence
16
What is this sequence?
4
Why do convoluted convolved Fibonacci numbers pop up from this triangle?
Question feed