Can the unsolvability of quintics be seen in the geometry of the icosahedron?

Q1. Is it possible to somehow "see" the unsolvability of quintic polynomials in the $A_5$ symmetries of the icosahedron (or dodecahedron)?

Perhaps this is too vague a question.

Q2. Are there consequences of the unsolvability of $A_5$ that can be viewed in terms of the geometry of the icosahedron?

I am seeking some connection for pedagogical reasons, from the geometry to the group theory. One could argue from orbits of vertices of the icosahedron under its various symmetries that $A_5$ has no (nontrivial) normal subgroups, but it is a long way from there to the unsolvability of $A_5$ for students who have not yet studied group theory.

Thanks for any connections you can suggest! 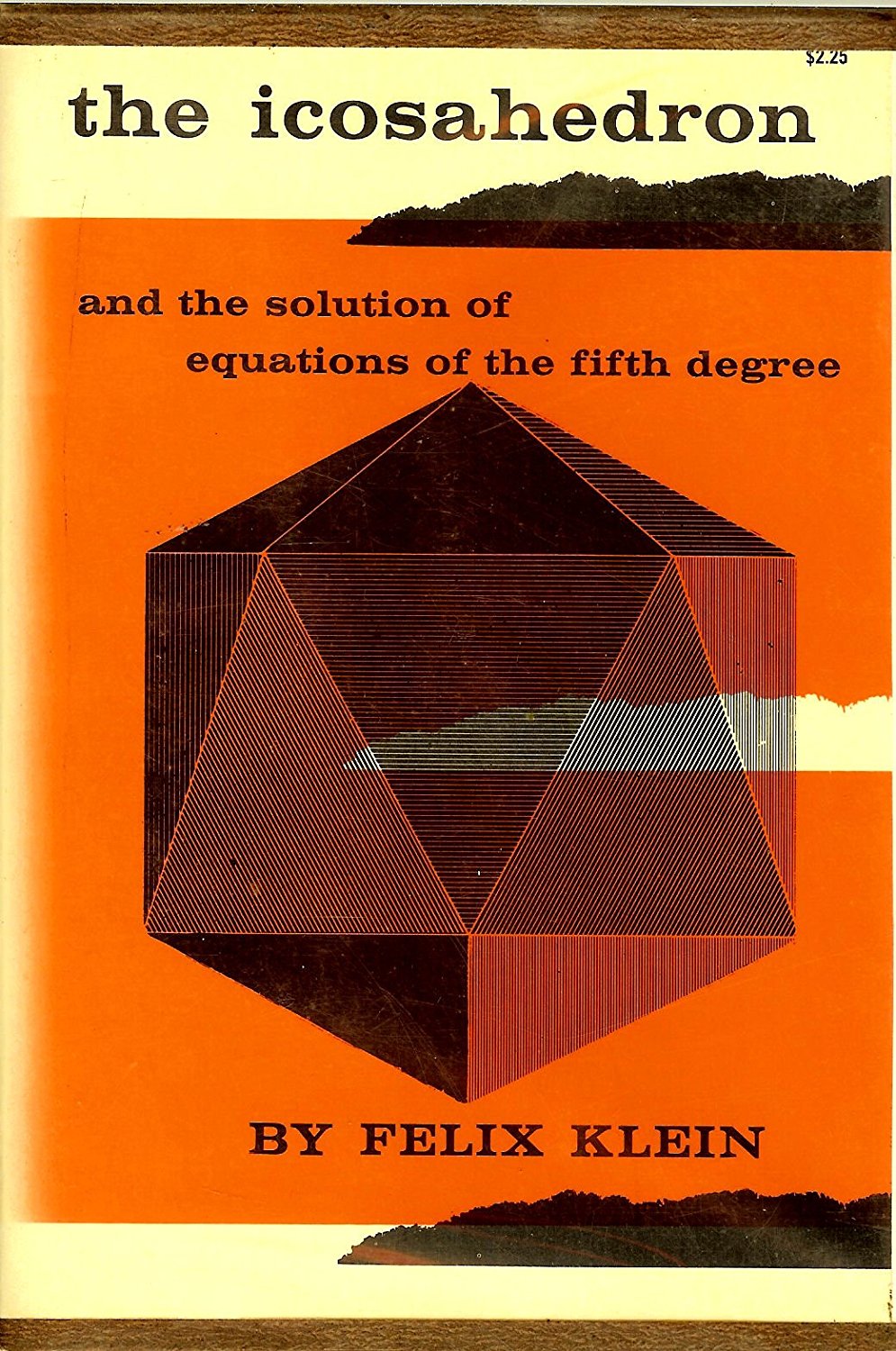 No longer $2.25, but still inexpensive through used-booksellers.

Update 2. And here is Jerry Shurman's book (PDF download), as cited by Barry and Sam Hopkins: 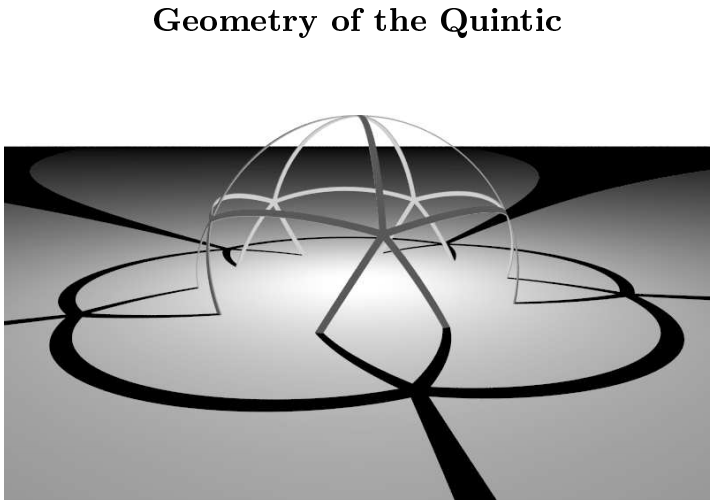 The most direct answer I know for this is the following:

Any maximal subgroup of a finite solvable group has index equal to a power of a prime. The unsolvability of $A_{5}$ is provable, therefore, by exhibiting a maximal subgroup of index 6 or 10 in $A_{5}$. These are both easy to see in terms of the geometry of the icosahedron.
The icosahedron has 12 vertices, so they come in 6 opposite pairs. The stabilizer of one of them has index 6, and it's obvious that this subgroup of index 6 is maximal because (considering a rotation of order 5 about one opposite pair of vertices) the action of $A_{5}$ on these 6 opposite pairs is doubly transitive (and therefore primitive).
Likewise, the icosahedron has 20 faces, which come in 10 opposite pairs. To prove this action is primitive, note that the point stabilizer has elements of order 3 which fix only the pair of opposite faces we have chosen. Using only this, we conclude that the point stabilizer has suborbit lengths equal to 1 and some multiples of 3 (in fact, we get 10=1+3+6 from the suborbit lengths). Since 10 has no proper divisors congruent to 1 mod 3, this must be a primitive action.

This is an old question, but I wanted to write a proof that $A_5$ is simple via symmetries of the icosahedron, using as little group theory as possible. I don't think that it can lead to a proof of the unsolvability of the quintic without the usual group theory (permutations, normal subgroups, quotients, solvable groups), and, of course, field theory.

Theorem: The group of rotations of the icosahedron is of order 60, simple, and isomorphic to the alternating group $A_5$. Therefore, $A_5$ is simple.

Let $G$ be its group of rotations. It has order $2*30=60$, because if $e$ is an oriented edge, then for any oriented edge $e'$, there is exactly one rotation that carries $e$ to $e'$. Any nontrivial rotation $g$ is of one of three types, according to whether its axis contains a vertex, an interior point of an edge (which must be the midpoint) or an interior point of a face (which must be the center). Its order is 5, 2 or 3, respectively.

Proof that $G$ is simple: A normal subgroup $N$ that contains a nontrivial element $g$ must also contain the cyclic group of powers of $g$, and their conjugates, which are all the elements of the same type of $g$. To show that $N=G$, it's enough to see that $G$ can be generated with all the elements of any one of the three types.

The compound of 5 octahedra: Consider the construction of three orthogonal golden rectangles inscribed in the icosahedron. The six short sides are edges of the icosahedron, and we can paint them with the same color. Observe that, whenever an edge $e$ is chosen, there is a unique way to build the rectangles in such a way that the edge $e$ is one of the short sides, so in this way the 30 edges can be painted with 5 different colors. The midpoints of the edges of each color are the vertices of an octahedron, so we have formed a compound of 5 octahedra.

Proof that $G=A_5$: Each rotation permutes the colors, so we have a morphism $G\to S_5$. The vertex rotations have order 5, so they must give 5-cycles, which are even permutations. Similarly, the face rotations give 3-cycles, which are also even. Finally, consider a half-turn rotation $g$ about the midpoint of an edge $e$ of color $E$. Let $a,b,c,d$ be the consecutive sides of the quadrilateral obtained by joining the two faces that share the edge $e$. The edges $a,b,c,d,e$ have different colors $A,B,C,D,E$. It's now easy to see that $g$ interchanges $A$ with $C$ and $B$ with $D$, leaving $E$ fixed. This permutation is also even. Since any nontrivial rotation of the icosahaedron gives a nontrivial even permutation, we have an injective morphism from the group $G$, of order $60$, to the group $A_5$, of the same order. It must be an isomorphism. $\square$

Regarding the question Q2, there is an interesting (though not quite elementary) application: The fact that the icosahedron group $G$ is simple is a step in the construction of Poincaré's homology sphere, a 3-manifold $M$ that has the same homology of the sphere $S^3$, but is not homeomorphic to $S^3$, because its fundamental group is nontrivial. A construction of this kind allowed Poincaré to reject a preliminary wrong version of his famous conjecture, which was originally stated in terms of homology (a 3-manifold with the homology of the sphere is homeomorphic to a sphere, as happens in dimension 2).

The homology group $H_1(M)$ is obtained by abelianization of the fundamental group $\Pi_1(M)=2G$, so we must prove that the commutator subgroup $[2G,2G]$ equals $2G$. Observe that $\pi([2G,2G])=[G,G]=G$, where the first equality holds because $\pi$ maps $2G$ onto $G$, and the second one holds because $G$ is nonabelian and simple, so the nontrivial normal subgroup $[G,G]$ must be equal to the whole group. So $\pi$ restricts to a surjective morphism $[2G,2G]\to G$ and there are two possibilities:

The picture shows the superposition of the two icosahedra, known as compound of two icosahedra. The rotation $h$ can be decomposed as $g=hk$ in 8 ways. More visually, there are 8 rotations of angle $\frac{2\pi}6$ that move the red icosahedron to the yellow icosahedron. 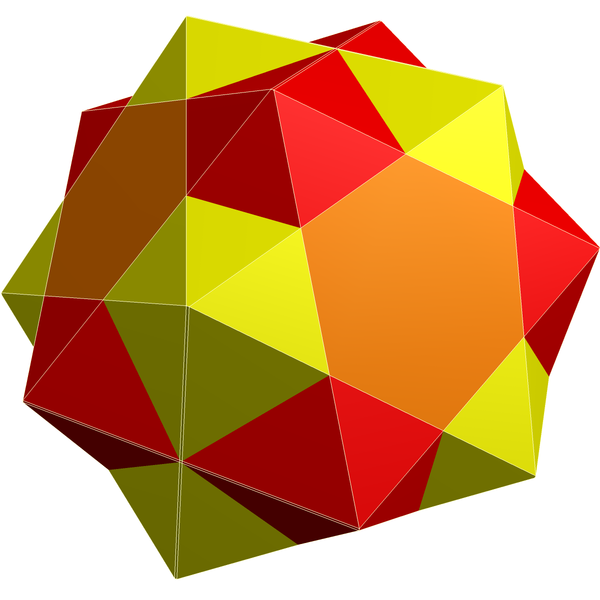 Since the angle-of-rotation distance in $SO(\mathbb R^3)$ is just the double of the geodesic distance in $S^3$ (which is the angle of vectors), to verify what I claim we just have to prove that $2G$ is $\frac{2\pi}{12}$-dense in $S^3$. This, if true, can be checked numerically with error of less than 1 degree. But it would be more interesting to have a picture of the Voronoi-cell decomposition of $S^3$ with respect to the discrete set $2G$. I wonder if this leads to the other usual presentation of the Poincaré sphere (as a quotient of the dodecahedron, identifying opposite faces by a $\frac{2\pi}{10}$ right-handed twist).

Not the answer you're looking for? Browse other questions tagged gr.group-theory discrete-geometry galois-theory teaching polyhedra or ask your own question.

29
Do there exist modern expositions of Klein's Icosahedron?
20
Historical use of figures in geometry
4
Unsolvability of a Quintic and its link with “Simplicity” of $A_{5}$

20
Why should the anabelian geometry conjectures be true?
14
The geometry of crinkled aluminum foil
0
Can finite index be seen at the level of profinite completion
35
Can the sphere be partitioned into small congruent cells?
47
What fraction of the integer lattice can be seen from the origin?
3
Regarding the set up of a geometry of numbers lemma
7
Theorems of the Galois groups of quintics appears not to work for the ${F}_{20}$ group determination
7
The $32$-deg polynomial for the tetrahedron inscribed in the icosahedron?
Question feed